COVID-19 and the Art and Science of Risk Management

Our humble Journal normally directs your attention to the good work being done by folks in all aspects of the risk business, from teams of social scientists to the various journalists who try to report on and make sense of the welter of studies, incidents, trends, official reports, and so forth about commercial risk that surface every day. Today's lead is a modest departure: a personal reflection on the strange, eventful journey of risk professionals through the murky waters of the COVID swamp.

COVID is unique in that it has touched virtually every aspect of risk management and the critical overlap of risk and HR. We cannot recall any challenge in living memory which speaks powerfully to the fact that life refuses to be crammed into the little policy pigeonholes we are normally so fond of. HR spills over into comp and vice versa. The contours of cyber risk change dramatically as we try to manage whole new business models on the fly and do contact tracing without tripping over HIPAA, GDPR, or other parts of the alphabet. Supply chain risks metastasize in ways unheard of up to about ten months ago. Liability concepts are changing before our eyes as legislatures, regulators, and courts try to fit laws and regs around a situation that changes every time scientists try to probe it.

In a recent commentary in workerscompensation.com, Bob Wilson referred to Dr. Fauci as "the lead guy in charge of making things up." I suspect that we all understand the frustration behind that remark just as well as we all say a silent "thank you" that we don't have Dr. Fauci's job. But, of course, in a way, we do have his job. We have to assimilate all of the information available, incomplete, and contradictory as it is, and DO SOMETHING. We are, after all, in risk management, not risk appreciation.

Here's what we see as keen observers of risk management in 2020:

Dealing with COVID - and its aftermath which will drag out for years - requires new thinking combined with organizational agility and flexibility. Oddly enough, now is a glorious time to be in risk management. We're not plodding through yet another iteration of the same tired old reports and renewals. Now is the time to show our value to the C-suite, perhaps to lead the parade of elephants instead of cleaning up after them.

I've quoted my late French stepfather before in these pages, but his words seem to take on more meaning with every month: c'est une grande vie si vous n'affaiblissez pas (it's a great life if you don't weaken).

A Tale of Two Hurricanes...

The great French diplomat and power broker, Talleyrand, is supposed to have said of the Bourbon royal family in 1796, "Nobody has been corrected; no one has forgotten anything and no one has learned anything."* The tales of Rita and Laura suggest that perhaps we, as people who live in places prone to hurricanes, have remembered and have learned something, and we suggest that risk professionals take note, if you have not already. A recent article in the New York Times compares the aftermath of Laura to the nearly identical Rita in 2005 - a natural experiment in risk management courtesy of Mother Nature. Both storms hit the same place, give or take a small stretch of sand; Laura was a bit more powerful in terms of peak winds, but moved faster. The different results show some fascinating divergences.

As the Times writers point out, "... Rita forced changes in regulations and attitudes that may have saved lives when Laura roared ashore early Thursday morning with 150-mile-per-hour winds - one of the most powerful hurricanes to hit the U.S. mainland." Despite the fifteen years of cost inflation and increasing population density in the Louisiana-Texas border region, between Rita and Laura, Laura looks likely to cost at least $5B less in total damage and it caused a notably lower death toll as well - fourteen as opposed to one hundred twenty. Those numbers alone should cause a risk manager to go on point. What happened?

Quite a lot, it seems. For one thing, people took the evacuation seriously. One local said afterwards, "My personal experience from Rita convinced me that this time, when they tell you to leave, you'd better leave." It really is possible to change risky behavior - if the lesson is big enough. Just as important, building codes were strongly upgraded after Rita. Post-Rita buildings fared much better. Said the mayor of Lake Charles, Laura's epicenter, "I am sitting right now on the sixth floor of historic City Hall and there are no broken windows because all of them were replaced after Rita." The homes rebuilt on twelve-foot stilts fared much better this time around than the previous dwellings built on slabs. The waters rose, but there was nothing to flood.

On the other hand, a new risk did emerge. A number of people died of carbon monoxide poisoning from generators which were not properly vented. They had learned the lesson about losing power, but did not site and vent the generators correctly - a new lesson for the next hurricane.

If you manage risk, every big storm is a lesson book, bigger and better than anything you studied at university. After all, your real education is what remains after you have forgotten what you were taught in school, right? Unlike the unfortunate Bourbon family, we can learn something new each time around.

*Note to any potentially picky history mavens: yes, this line actually comes from a letter by the Chevalier de Panat- who is commonly thought to have been quoting Tallyrand. So there.

Risk management - on stilts. What flood?

Quick Take 1:
Is That Truck Following You a Little Too Closely?

An everyday moment when your heart ages several months: all you can see in your rearview mirror is the grill and bumper of an enormous truck - and the traffic light thirty yards ahead of you just turned red. Sound familiar? A new study by the Insurance Institute for Highway Safety (IIHS) provides us with some real world numbers concerning those newfangled automatic emergency braking systems you may have heard about.

The good news is really good. According to the study, which reviewed the accident histories of similar trucks with and without the systems covering some 2 billion (yeah - Billion) road miles, the automatic braking reduced actual rear end crashes by some 40% and reduced the speed of those that did occur by over 50%, resulting in much less damage and fewer injuries. The IIHS has called upon the Federal government to require these systems on new heavy trucks.

From a risk management point of view, this is spectacular news. If you had any lingering doubts about spending the extra bucks to equip your new highway rigs with the updated braking tech (or retrofit your older rigs), this study should put those concerns to rest. "Rear-end crashes with trucks and other vehicles happen a lot, often with horrible consequences," said Eric Teoh, the institute's director of statistical services who did the study. "This is an important countermeasure to that." We applaud Mr. Teoh's fine sense of understatement.

If you're the driver of that itty-bitty econobox car slamming to halt at the red light (see above), hope that the fleet manager of the truck behind you already made that move. 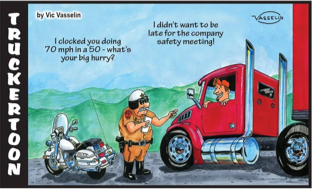 Quick Take 2:
So, I Ask You, Does Retail Talk to Wholesale?

Back in the Middle Ages, about the time I learned to carve a quill pen, the wealthy men in town kept an eye out for harbingers. When the king made a royal progress through the country, his harbingers would find places for the king and his retinue to stop, water their horses, sample the local ale, etc. A harbinger would mark the door of a suitable establishment with a chalk rendition of the king's monogram. When a group of harbingers rolled into town, you knew something was up.

We see some activity bubbling up in retail property insurance that may merit attention as a possible forerunner of new developments in commercial P&C. Climate change is knocking in very real terms. California* is in the forefront, alas for them. The series of wildfires over recent years has made a serious number of homes uninsurable and thus untenable/unbuyable/worthless, since adequate insurance is a requirement for a mortgage. The number of homes we see reported as newly uninsurable is around 200,000. Not a drop in the bucket, and this number does not factor in the properties now under siege by this season's fires. That number will likely rise significantly once the 2020 fire season is totted up.

Do you have commercial facilities that might soon be tarred with the "uninsurable" brush? California's passle of consumer advocates is trying to stop P&C carriers from refusing to renew residential policies in fire zones, but commercial insurance sits largely outside of the political to and fro. If the fire insurance rates on your distribution center, say, go sky high, you, as a big business, may not get a lot of public sympathy. The point - are you and others in your department seriously looking at which properties to retain or continue leasing in the light of wildfires, hurricanes, and other disasters that seem to revisit certain geographies? If the residential area two blocks down the street becomes uninsurable, is the handwriting on your walls as well? How should you deal with that? Better to develop your plans before the harbinger scribbles on your door.

Ever feel shaky? A little unsteady maybe? You may have company if you're in SoCal.

*A minor transverse fault that intersects the San Andreas. Indeed, the Garlock had a bit part early on in the movie San Andreas. Well, life may follow art because the Garlock's been a little antsy lately.

In 2020, the following refers to far more than hurricanes:

What a hurricane does is it completely disrupts persons' lives - your meal, your sofa, your air conditioning, your clean street, the newspaper delivered, whatever. Each fragment of normalcy* that you can get back to the people, it's very important for their well-being.

*Should be "normality" but this neologism was popularized in the early 1920s by President Warren G. Harding (a distant cousin) and has been with us ever since.