Can Insurance Be Saved?

The recent critique of insurance, as we have come to know and love it, in The Economist suggests that this is an open question. The point in this closely argued article is that conventional insurance carriers are becoming irrelevant as vastly more agile technology, finance, and reinsurance firms reinvent the concept without them.

The Economist uses the example of The Weather Company (TWC) and how so many major firms have learned to utilize the vast amounts of weather data now available to manage a vast array of exposures more effectively. "But many property insurers, whose fortunes rely on forecasting climate-induced losses, are still learning how to use the information, says Leon Brown of TWC. Their cluelessness is symptomatic of a problem for all insurance lines, including casualty, life and health."

The article goes on to cite a number of rapidly developing areas of risk such as cyber crime and the aging population (extensively covered in these august pages, you'll note) where carriers appear to have been left at the station. They say they're promoting innovation, but "the [insurance] sector comes second to last in an innovation ranking by BCG, a consultancy. No insurer ranks among the world's top 1,000 public companies by amount invested in research and development." Whoops. No wonder the new insurtechs are eating the carriers' lunches regularly.

There are reasons for the sluggishness of the industry. Insurance is densely regulated, for example, and innovation can easily be mistaken for non-compliance with some obscure regulation by government bureaucrats. Combine this with the industry's long-running romance with complexity and underwriting down into the decimal dust and you get half-hearted lurches towards ineffective changes.

The reinsurance arm, on the other hand, is moving forward and a number of innovations, such as "parametric" insurance are being driven primarily by reinsurers and TPAs. Think about it. Have the carriers you work with talked about anything other than rate adjustments recently? Are they curious about how your exposures may be changing? Are they discussing new ideas in risk mitigation? Are they seriously updating policy language from 1995 to meet the needs of 2020? If you can't answer "yes" without crossing your fingers, maybe you need to rattle some cages.

The State of the Opioids

As always, comp is a game of states. A new report from our friends at the Workers' Compensation Research Institute (WCRI) underscores this fact with a look at how the opioid problem varies from state to state and how different states are getting distinctly different outcomes in their attempts to curb opioid use. The good news is that opioid use is down in all of the 27 states reviewed by WCRI.

The percentage of claims involving at least one opioid prescription varied from 32 to 70 across the states studied. The highest dosage prescriptions in MME (Morphine Milligram Equivalents) were racked up in Delaware, Louisiana, Pennsylvania, and New York. Dig this, the average MME in Delaware and Louisiana was three times the median value for all states and five times the average MME for prescriptions in Missouri, the lowest dosage state. You have to wonder what's going on here. What hurts five times worse in Delaware than in Missouri?

There are encouraging signs of progress. Average MMEs are coming down. Over the last few years the average MME in California has been reduced by over 50% and some 17 states saw MME reductions of 30% or more. Even more notable is the fact that the percentage of injured workers receiving any form of pain medication dropped by 2 to 14% with opioids being widely replaced by NSAID pain relievers. The use of various non-pharmacologic pain relief modalities, such as physical medicine, also increased. The overall rate of claims involving some form of pain intervention remained fairly constant. The change in pain medication raises an important question. Was pain being overmedicated generally in previous years or are physicians undertreating pain now, given the outcry over the opioid epidemic?

Pain remains one of the biggest puzzles in modern medicine. Pain has no physical reality. It is a construct of the brain, which is why reported pain varies so dramatically from person to person*. This is also why optimally managing comp claims with significant pain components remains an elusive goal. The WCRI report shows work in progress, but it is still a good idea to consult with your claims people on how they're handling pain in the "high-prescribing" states with the sky-high MMEs reported by WCRI.

*Your reporter had major surgery in 1988 with no anesthetics for pressing medical reasons. It can be done. Pain is literally all in your head.

Quick Take 1:
Is There a Dorkbot With Your Name on It?

Malicious hacking is now a new form of enterprise with vendors, product lines, malware categories, and even 24/7 customer support on the Dark Web. A favorite target right now is supply chain companies, according to a new report just issued by CheckPoint Research. Targets of choice are email systems, mobile banking apps, and clouds. Note that the huge Capital One hack (who's in your wallet?) which hit the newswires last week used a cloud point of entry.

The report goes on to provide a Consumer Reports style list of the most widely used malware products by type and brand name. For example, here's just one popular category from the report:

There are three additional major categories in this catalog of software grief. If your IT defense people (you do have them, right?) don't have this report, perhaps you should forward the link.

A couple of centuries ago, the Tuareg nomads in the northern Sahara used to swoop down on farms along the Mediterranean coast at harvest time. Their saying became feared far and wide: "raiding is our agriculture." For a large number of well organized groups, hacking is their business and it's a big business. Lloyd's puts the current toll on worldwide business at $400 billion. So - is there a dorkbot out there heading your way?

Quick Take 2:
What Will the Millennials Mess Up Next?

Eyes tired? Too much squinting at too many spreadsheets? Well, here's a podcast you should listen to - How Millennials and Work Remotes are Impacting Workers' Comp. Yes, millennials keep changing things around, as the podcaster, Ryan Benharris of The Law Offices of Deborah G. Kohl, points out. They like working remotely, they like non-conventional forms of employment, freedom from the 9 to 5 lockstep, they like working in ways that do not fit well in the straightjacket that is good, old fashioned workers' comp.

As Benharris puts it, "There are questions in every single state and in every single jurisdiction, whether or not those particular individuals are classified as employees under the terms of their workers' compensation statute, and it is a real gray area..." As we have noted in recent issues, the so-called "gig economy" has not yet made a detectable impact on comp, but millennials are now the largest cohort in the national economy. Every day, a larger proportion of the employees who work for your company in some capacity belong to this unconventional bunch. Are they employees or contractors? How many work remotely? Does "remotely" mean from home or from the local Starbucks? What are their hours for indemnity calculations? The list goes on.

Check out the podcast - a very millennial form of communication, after all. How confident do you feel about your grip on the issues it raises? 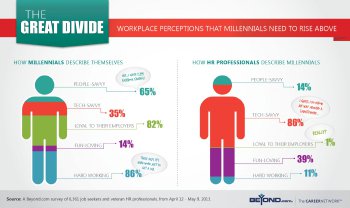 A recent look at millennials and corporate HR. What could possibly go wrong?
Click here to view full size

The development of cyber risk is unrolling at the speed of blight. It's hard to keep up with all of the new risks and threats. If this concerns you, we strongly recommend the two part discussion by Nancy Grover in Workerscompensation.com last week aptly titled Protecting the WC Industry from Cyber Threats: No Time for Penny Pinching , also available here. This is the best overall summary of the current state of affairs we have seen recently. We know it's good because she quotes us.