Is a nice, juicy report on hospital consolidation and its impact on medical costs not your idea of beach reading? Maybe you should think again. The new report by the National Council on Compensation Insurance (NCCI) is both important in what it tells us and a model of reader-friendly report writing.

Let's review: medical care pricing is an arms race between providers and payers. It always has been. The first medical fee schedule - in shekels of gold - was promulgated by King Hammurabi of Babylon 3800 years ago because medical costs were getting out of line even then. The big driver today is facility consolidation - hospitals buying other hospitals. Increased size brings increased pricing power, as the NCCI report makes remarkably clear. While consolidation has reduced actual operating costs by 15 to 30%, the average pricing for facility-based services has gone up by 6 to 18%. Often, a newly consolidated entity may now be the only medical show in town.

Hospital groups are not only buying other hospitals, they are also buying up physician practices, generating even more pricing power. Yes, you may say, but my state has various rules that control pricing for workers' comp medical care. Surely, that provides some protection - right? Well, Medicare does the same thing in regulating prices. Indeed, comp regs often piggyback on Medicare cost controls. But the new NCCI study shows that hospitals are simply increasing the quantity of care delivered to go around Medicare's unit pricing controls.

The new NCCI study lays out each part of this story in a remarkably clear narrative, accompanied by a few simple, well-chosen graphics. The format makes it easy for the reader to go into as much or as little detail as desired while still getting the essential story. We say kudos to NCCI for walking away from the faux academic format of so much published research. There are footnotes, if you like to wallow in detail, but the message is clear, concise and unmistakable.

Read at least the first few sections if the cost of workers' comp looms large in your risk budget. How are you and your claims payer going to deal with this growing pricing power? Conventional medical cost controls may not be enough in this brave new world of giant regional medical centers. Looks like time to think outside the cost control box. One lesson from mankind's long and sorry list of arms races is that every move generates a counter-move.

Yes, dear reader, the US has an official Planetary Defense Officer. Mr. Lindley Johnson works for NASA in that capacity. His job is to manage the team at NASA that monitors the roughly 18,300 asteroids, comets and other chunks of space rock that might intersect Earth. About 800 of these orbiting bits of leftover geology are over 140 meters (450 feet) in size. In other words, potential city killers.

Until February 14, 2013, only a few astronomers cared. Then a meteor exploded over Chelyabinsk in Central Russia. Who knew? These things are seriously dangerous. Here's the kicker for risk management. Despite all the movies you may have seen on the topic, NASA and its fellow space agencies have a very simple plan when they detect an object headed for Earth. They will calculate where it will impact our planet and then Lindley Johnson and his colleagues will tell us all to get the hell out of the way. The Toronto Star recently provided a very readable roundup of interplanetary menaces which provides more details.

The point is that part of any risk portfolio needs to be an evacuation plan for each of your major facilities. The possible reasons to skedaddle are many. Not just falling asteroids but also the next Hurricane Katrina or Super Storm Sandy or the next Ebola outbreak or, in some foreign locations, pending political unrest or even war. Having a plan for picking up and getting out of the way is a good idea in a world that appears to be growing more dangerous rather than less. The conservation of corporate assets and capabilities may depend on your readiness to pack up and move quickly.

Maybe we all need a Planetary Defense Officer.

When the Equal Employment Opportunity Commission asks for our attention, perhaps we should pause for a moment and take them seriously. A very recent EEOC press release tells the story of a long term kitchen worker at a California hospital facility who suffered a significant vision impairment as a result of disease. While this instance does not involve an on-the-job injury per se, keep in mind that everything that follows would play out the same had this person suffered her vision impairment as the result of an accident covered under workers' comp.

The employee, once her vision had stabilized, set about learning how to cope with her new limitations. The release tells us that "she successfully mastered everyday tasks, including cooking in her own kitchen and excellent proficiency with knife skills, [then she] sought to return to work and informed her employer of multiple accommodations that she or the California Department of Rehabilitation could provide to allow her to perform the duties of her job." The employer responded by invoking a vision requirement which had never been mentioned or utilized before this instance and refused to make any attempt at accommodating the employee.

The EEOC has now brought an action against the employer under the Americans with Disabilities Act and its amendments under ADAAA seeking a laundry list of remedies and damages. EEOC Trial Attorney Ami Sanghvi noted, "The ADA requires a two-way interactive process between the employer and employee. Yet, without providing alternatives, Dignity Health [the employer] rejected the multiple possibilities [the employee] proposed" for reasonable accommodations.

Yes, that two-way interactive process applies to RTW under comp as well. You can't make casual assumptions about people and their abilities to perform specific jobs. Even if the injured person is now vision impaired. Even if the job in question involves using knives and other kitchen equipment. Now the employer gets to explain in court why they wouldn't even give this person a chance to show what she could do after extensive rehabilitation and retraining. How would you like to be in the witness chair explaining that to a judge and jury? The EEOC is suggesting that you think about that the next time you have a request for a workplace accommodation.

Keys in a Can?

My father's 1944 vintage Jeep had a toggle switch on the dash. Flip it up, hit the starter button, and off you went. How many of your fleet's newer cars and light trucks have electronic fob "keys"? They may not be any more secure than that old Jeep if your drivers are not using the right Faraday bags, tinfoil, or old metal coffee cans to keep those keys safe. A Detroit Free Press article (picked up by CBS News here) reminds us of how easy it is for new model thieves, digital native themselves, to pick up all the codes they need to open your vehicle, ransack it, or simply drive it away by pulling in the weak radio signals broadcast by those fobs. Handy for your driver and equally handy for your local, neighborhood thief. 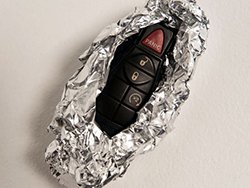 No, this is not a recipe for baked fob.
To protect a car from theft during the day, wrap the fob in aluminum foil.
(Photo: Cameron Pollack, Detroit Free Press)

Have you made RFID Faraday bags or the equivalent standard equipment for your drivers? Have you schooled them in how to store their keys at home - in foil or a metal can? (Aluminum foil works but copper foil is even better.) This is just one more example of how modern electronics create cyber exposures faster than we can keep track of them. By the way, where are your car keys, Mr. Risk Manager? On a hook? In your pocket? Are you setting the right example?