In a new installment of ITL's Six Things Blog, Paul Carroll asks the kind of make-you-stop-and-think question he's so good at. What if last year's California Camp Fire combined with PG&E's widely assumed liability and bankruptcy from the $30 billion (and counting) in fire related losses is the first of a new type of loss: the first undisputable climate change catastrophe of modern times?

We include the proviso "of modern times" because we know that the onset of Europe's Little Ice Age in the 16th Century caused horrendous damage across Northern Europe. The list of towns and villages lost in a long series of catastrophic floods in the Netherlands alone goes on for pages. The point is that those floods centuries ago ushered in a "new normal" in terms of a much colder and wetter climate that lasted for another two and a half centuries. The Dutch were still reclaiming lands lost to those floods after WW II.

In his provocative essay, Paul lists the damages sustained by each stakeholder, from the residents of Paradise to the shareholders of PG&E, to the insurance companies, California rate-payers, and tax payers. Everyone, in effect, gets soaked in ways that will last for years. The point is this: "Do we just keep doing what we've been doing? Or do those of us who bear the financial burden demand change? I suggest we demand change."

Does the new normal of a changing climate call for all of us in the risk business to rethink the basics? For carriers to ask more of their insureds in terms of remediation? For risk managers to be more pro-active in terms of anticipating changing risk parameters? For everyone to actively question "we've always done it that way"? Or do we, like the Dutch four centuries ago, soldier on in the old ways of doing and thinking while the list of towns and villages drowned in the North Sea gets longer and longer?

Your ink-stained scribe lived for many years in Northern California and every month we made our utility payment check out to "Pigs, Goats & Elephants" and, sure enough, they cashed it. But it's not funny anymore. Time to rethink?

The Doctor Will See You Now: A New Look at Telehealth

The question of telehealth first appeared in these pages back in February of 2016 in a review of the thin literature then available. We concluded at that time: "Because [telehealth] is new, relatively little is known about its real advantages and its potential drawbacks. Serious reviews and studies have only become available within the last year and meaningful outcomes studies are still lacking."

What have we learned in the last three years? Funny you should ask, because a recent study released by the American Journal of Managed Care reviewed data provided by Massachusetts General Hospital in Boston covering their telehealth program which began in 2012. While this study is not focused on workers' comp related care, it provides some solid results relative to how well telehealth works from the perceptions of both patients and physicians.

The short answer is that the great majority of the patients and physicians surveyed in the study thought their telemedicine appointments were as good or better than face to face doctor encounters. One truly remarkable finding was that 46 percent of the providers and 33 percent of the patients perceived the personal connection to be better during a video visit. Apparently, according to the director of the telehealth center, these very positive findings stem in some part from the patients' desire to have uninterrupted time with their physician, absent the waiting time issue and physical hassles of a visit at a medical facility (think - Boston traffic).

An important sidelight on the use of telehealth in workers' comp was reported in an interview in WorkersCompensation.com with Mary O'Donoghue, Chief Clinical and Product Officer for Medrisk, who noted that, "The convenience of reduced travel and less time away from home or work is incredibly beneficial for both the patient and the employer." It appears that telehealth is finding its proper place in the techniques and routines of American medicine.

This leaves an obvious question, however: what will happen to all of those dog-eared magazines we used to thumb through while waiting for old Doc Welby to get around to seeing us?

The hacker tool known as NotPetya has graced these pages before. It is an especially nasty piece of malware which burrows into a weakness in Window's Server Message Block protocol. It started turning up in 2017 when it was used in WannaCry ransomware. Now here's a new wrinkle in the hacker wars. The systems of the international snack food maker, Mondelez (Cadbury, Chips Ahoy, LU, Nabisco, Oreo, Philadelphia, Ritz, Tang, Triscuit, Wheat Thins - to name but a few of their brands), were attacked with NotPetya over a year ago, causing extensive damage when major data troves were randomly scrambled. When Mondelez filed a claim, something amazing happened. The carrier invoked the war exclusion to deny coverage.

Huh? We suggest that all risk managers, especially those with international system exposures take a look at this report. Note that the attack was disseminated via a hijacked software update for a Ukrainian tax software tool and phishing emails. As we've repeatedly pointed out here, your systems are no more secure than your weakest link - like Ukrainian tax reporting. Since NotPetya has been strongly identified with Russian state supported hackers, the carrier seems to be portraying the attack as an act of war and thus not covered under the standard act of war exclusion in most property policies. Looks like a good time to review your cyber damage coverage and perhaps talk to your broker and carrier about what is or is not an act of war - before your claim is denied by the rockets' red glare.

Had your USDA recommended dose of irony today? NotPetya is based on an exploit named EternalBlue. Rumor has it - if you hang out on the Dark Web - that EternalBlue was originally developed by our very own National Security Agency. Our tax dollars at work.

We've noted this development before, but it's getting more frequent and needs to be in the sights of risk management for any enterprise that has a website. If you're still using telegrams and carrier pigeons, you can skip the following.

Title III is the public accommodations and access provision inside ADA. Back when ADA was new, Title III actions were focused on physical accommodation - wheelchair ramps, signage for the visually impaired, and so forth. When ADA was new, websites in the current sense essentially did not exist. Now your website is a form of public accommodation. New ADA regs (Web Content Accessibility Guidelines 2.0) and some new court decisions are reshaping how ADA works in 2019.

The point to note carefully is this: the good people at Seyfarth Shaw LLP have been tracking suits in process on this very topic. Last year the number topped 10,000. Just a few years ago, the number was a tad over 2,000. Looks like a growth industry.

If you have not reviewed your public website(s) for compliance with the most current ADA regs, now would be a good time. Not too long ago, website access lawsuits were a novelty. Now they're a trend. If the 2019 number of suits goes over 12,000, which looks likely from the graphs in the Seyfarth Shaw study, you don't want to be one of those data points.

Quick Take 2:
So You Think You Have Fleet Problems?

It happens more than thirty times every day somewhere in Mexico. A large truck, often an eighteen wheeler, is pulled over at gunpoint, sometimes with a warning blast of automatic fire from an AK-47. Armed highway robbery has become commonplace. And it's getting worse. Mexican police received 11,425 reports of armed robberies of cargo vehicles in 2017 - or an average of more than 31 a day. But in 2018, there were 11,062 reports from January to November - 33 a day.

This is now a risk that goes beyond insurance. Armored trucks are no longer just for cash transport. Mexican trucking firms spend an estimated six percent of their revenues on security, such as armored cabs and new electronic reporting devices, versus about 0.5 percent worldwide, according to industry figures. One new idea - the steps up to the cab retract so would-be robbers can't get to the doors. While the situation in Mexico, with drug cartels running rampant, is unique, managers with international fleet operations might want to take note. Where will this pop up next?

Everything old is new again, including highway robbery. So far as we know, Mexico has not yet spawned its own Black Bart, the gentleman highwayman who held up Wells Fargo stagecoaches in old California and left poems for the bemused passengers. His most famous lines, from an 1877 robbery:

I've labored long and hard for bread,
For honor and for riches,
But on my corns too long you've tread,
You fine-haired sons of bitches. 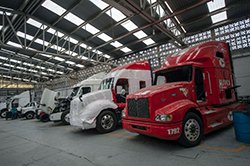 Armored up rigs: don't leave home without one