Another Way of Looking at Age

How many light vehicles are in your fleet today? Regardless of the number, we suspect the average vehicle age has gone up materially in recent years. Americans are aging and so are our cars and light trucks, as we see illustrated in this graphic from the delightfully named publication, Collision Week. 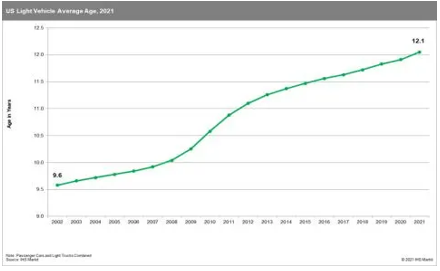 Wow - and you think you're getting old?

There are a number of reasons why the average age of our light duty fleets has gone from 9.6 to 12.1 years, but two seem to be paramount: (1) newer vehicles simply hold up better than earlier models thanks to advances in materials and design and (2) replacement costs are escalating faster than inflation. The Bureau of Labor Statistics reports that the rental cost (a better gauge than purchase price) of cars and trucks went up some 27.7% in the first part of 2021 alone. Steep price increases are hitting both new and used vehicles. COVID-induced market distortions and the current chip shortage are, of course, playing their parts in this game of competitive sticker shock.

How does the march of ages impact the management of fleet risk? For one thing, you are looking at far more major replacement cycles at 12 years than at 9 years. Older vehicles not only require more maintenance, they require more extensive maintenance procedures like subsystem rebuilds and critical component replacements.* Your fleet may require more redundancy to allow for longer in-the-shop intervals. In some cases, driver refresher courses may be called for to re-educate your people on operating older equipment and being more alert to potential problems, especially those subtle issues that arise as vehicles accumulate wear and tear without anything actually breaking.

You may need to get more detailed about failure logs and cost-per-mile figures to prioritize unavoidable equipment replacements. Unfortunately, the older your fleet, the more likely it becomes that you may have to show in-depth proof of strict, non-negligent adherence to appropriate maintenance schedules in the event of accidents. You may also want to rethink how you layer in self-insurance if fleet related claim patterns appear to be shifting.

None of this is headline news, but the fleet age issue has been inching up on us for many, many years now - so gradually that we may not even see it until something happens. I know some people who like surprises. None of them are risk managers. Increasing average fleet age is more than just a number - it's a call to rethink and recalibrate.

*Your intrepid reporter just dropped a bundle on a major rehab for his faithful Subaru, which he intends to keep until the wheels fall off. 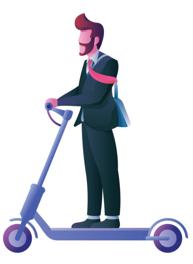 How to simplify your fleet.

Are You Resigned... Yet?

COVID has not yet run out of curveballs to throw at risk management. Several articles have appeared recently concerning what some economists are calling the "great resignation." An Axios article, for example, tells us, "Surveys show anywhere from 25% to upwards of 40% of workers are thinking about quitting their jobs." Apparently the disruptions of COVID, such as working from home, spending more time with family, and having to endure one's own company more than usual have caused a number of folks to reconsider what they want to do with the rest of their careers and lives.

Other commentators, such as Jack Kelly writing in Forbes , are questioning how much actual resignation activity will really materialize despite the muttering going on in the ranks, but it appears that something is afoot. There is a growing body of opinion and research focusing on the great resignation and what it means now developing in the business and academic press. The good news for us risk mavens, of course, is that HR will take the immediate hit should any resignations rattle our own august halls, but there's always a risk angle, and it may be bigger than it appears at first glance.

The risk question is what might this mean for our vendors, subcontractors, clients, and business partners generally? How might a wave, even a small one, of resignations rippling through our foreign and domestic supply chains or our external transportation operations, or our critical process support vendors impact their ability to meet our material, process and enterprise needs? What are our mission-critical vendors doing to protect their own capabilities against a sudden loss of experienced personnel? Do we have mechanisms, formal or informal, in place to trigger notifications and consultations in the event that the loss of certain personnel may materially impact performance? Ideally, our first notice won't be a delayed or missing shipment or an unanswered email or a phone ringing and ringing.

Back in the day, yours truly ran the proposal department of a very large carrier. Part of every RFP we had to answer was a section on personnel turnover. We took this as an opportunity to educate our prospective clients on what we considered our ideal turnover and to make the point that the right answer was never zero. A certain rate of turnover - we figured it was about 12% annually* - was healthy and good for all parties. So what level of turnover might be unhealthy for you and your business partners? Do you have a list, written or otherwise, of key vendor personnel whose departure would ring serious alarm bells?** Are you having this conversation with mission-critical partners? Will you?

*This number was very specific to a particular industry segment and internal function. There is nothing magic about 12%, but every service provider should know what that real number is for each major internal operation. If you don't know the number of success, how will you ever be successful?

**For example, who are the folks guiding your containers through the unprecedented mess of today's international shipping processes? What might happen if one or two of them resign?

Quick Take 1:
How Do You Say AI in Australian?

Judging from an item in ITL, Artificial Intelligence translates quite nicely into regular Oz-speak. The article by David Bacon, the General Manager of QBE Insurance, provides an excellent, compact example of how AI can be used to improve claims handling in Australian workers' comp. The specific case at QBE involved work comp claims, but the need QBE's managers defined and the process they used to meet that need have broad applications.

As Mr. Bacon puts it: "Leadership wanted to do more to eliminate manual processes and take advantage of claims adjusters' expertise to get the best result for customers and their employees." Most particularly, QBE wanted to get the right claims to the right adjuster as quickly in the claims process as feasible. The project team decided that AI was the right approach but they then had a classic buy/build decision, beautifully described in the essay.* Some folks apparently were reluctant to accept AI at first, but the decision soon proved out: "The [AI] models not only saved countless hours of manual work but their accuracy made decision-making significantly easier."

We call your attention to this story in part as a footnote to our review of Daniel Kahneman's new book, Noise, in our last issue. The book pointed out in detail how "noisy" all human driven decision processes are. Even the best homo sapiens experts often don't even agree with themselves for all kinds of reasons proper to the fuzzy, inconsistent ways human brains work. AI systems minimize noise. Mr. Bacon agrees: "We believe that quality assurance shouldn't be driven by art; it should be driven by analytics, which is exactly what we've been able to accomplish." For certain types of decisions, AI systems are far more consistent and accurate.

We're not at the point where you should ask an AI system what you should have for lunch.** The response is likely to be terribly healthy and terribly boring. But if you want help in getting claims right, perhaps you should hire Alexa's cousin as your next claim rep.

*A decision more folks are making all the time.

**But there are a lot of questions you can ask. For a quick, not too tech-heavy overview see "Top Problems that AI, ML Help Solve" by Ryohei Fujimaki. 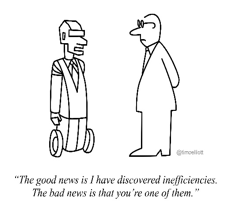 Quick Take 2:
So What Are You Doing About the Zombie Threat?

Yes, gentle reader, zombies are real and they represent a serious risk. By "zombies" we mean zombie companies - those organizations currently being propped up by very cheap money, loads of debt, government handouts, and by eating their seed corn. We first stumbled on new concerns about zombie companies in a Reuters report concerning their looming impact on P&C rates. Swiss Re, no less, said recently, "The expectation that hundreds of so-called zombie companies will fail over the next few years and drag on the economy is among the major concerns prompting insurers to reduce risk and charge higher premiums..." In other words, your current/next renewal probably has a "zombie assessment" buried in it, anticipating the day interest rates tick up and these outfits find they can no longer service their leaning tower of debt.

But wait, there's more! Do the ranks of zombie companies include any of your clients, suppliers, or other cogs in your commerce platforms? Insolvency risk is nothing new, of course, but the financial twists and turns of the last 18 months or so appear to have greatly expanded the list of potential insolvency risks. Depending on your industry, this expansion may include companies you have had long and comfortable relationships with and you may not know yet that COVID-related events have gutted their financials.

Our point is simply this: review your solvency requirements with your trading partners throughout your financial ecosystem.* Be certain that you have everything updated.** Consider writing new agreements and covenants, adding collateral requirements, and so forth, accordingly. Letting existing agreements slide may prove a very costly sin of omission in the months ahead. Bear in mind, the rule is the same for corporate entities as for us as individuals - just because you're not dead doesn't mean you're really alive.

*You are an attentive reader. Yes, zombie risk and the great resignation risk may have important vendor/support organizations in common. In either case, close communication and contract enhancement are the order of the day.

**Financial developments often happen in slow motion. Never forget that when Mutual Benefit Life went insolvent in mid-1991, it still had an A rating. Massive disintermediation took it down in less than two weeks. Today's rating formulas consider disintermediation risk, but it wasn't on the radar in 1991. 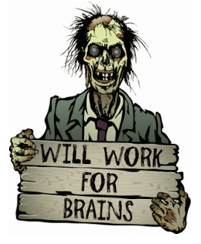 Recruiting isn't what it used to be.

The end is near:

All point of sale (POS) systems nowadays use chips. Your order isn't up yet? Go easy on your server. It's probably a lack of POS chips. Takes forever to get your check? Likewise. Reservation messed up? Yup, that too. Your Coq au Vin watery and your Salade Lyonnaise underseasoned? Quel scandale! That's the chef, not the chips.

Normally we reserve this space for a quote that comments, however obliquely, on one of our stories. For this issue we make an exception for this image and quote sent by a friend in Australia: 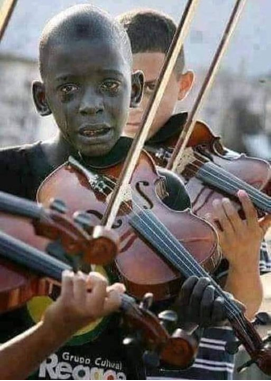 This photo was taken of a 12-year-old Brazilian boy playing the violin at his teacher's funeral, playing the favorite piece of music of the deceased, who saved him from the environment of poverty and crime in which he lived. In this image, humanity speaks with the loudest voice in the world: "Cultivate love and kindness in a child and you will gather love and kindness. And only then will you build a great civilization, a great nation." (Nihal Buyukeroglu)