He Said. She Said. Pew Studied.

The Pew Research Center has just released a new report, Women and Leadership, 2018, which has some challenging new ideas for risk management in specific, as well as for corporate governance more generally. Let's start with the major takeaway for risk purposes: 43% of the respondents said female executives are better than men at creating safe and respectful workplaces - only 5% said men were tops.

Let's contemplate that phrase - safe and respectful workplaces - for a moment. What does that have to do with risk management? Probably a lot. According to the survey, women are significantly more likely to understand the societal impact of business decisions. They are also less likely to embrace risk itself. The survey portrays women as more cautious and thoughtful in making important decisions. Is a picture starting to form here? Indeed, the great majority of Americans see women as equally competent in running major businesses in all industries except one - professional sports. Go figure.

The takeaway for Journal readers seems to be this - are we utilizing women effectively in managing risk and safety/loss management related assignments? As of the last count readily available, 38% of RIMS members are female. Women now equal or outnumber men in many of the undergrad programs which feed risk management. Women are now more than 40% of MBA students, for example. In 2011, 46% of the students in science and engineering advanced degree programs were female (National Science Foundation). Clearly, we have no shortage of new female talent.

Contemplate this statement from the report: "Roughly three-in-ten adults say female leaders do a better job than men at being honest and ethical (31% in politics and 30% in business), while relatively few say men do a better job than women (4% in politics, 3% in business). Similarly, about three-in-ten adults say women are better at standing up for what they believe in (30% for politics, 32% for business), while roughly one-in-ten say men are better (11% for politics, 10% of business)." Any relevance to risk management here?

So, look around you. How many of your risk colleagues in management positions are women? How are you doing in creating and maintaining a safe and respectful workplace? Remember, most corporate risk is created by people, not things, whether directly or indirectly. Your biggest cyber risk, for example, is a disgruntled or careless employee, not your server farm. Superior risk management requires superior people skills and the Pew report gives women the hands down lead in this critical dimension. St. Paul tells us to think of those things that are of good report. Pew just gave us a bundle of things to think of.

Ready for Some Good News on the Cyber Threat?

Most of us are and the good people at Accenture have just published a new report, Seizing Cyber Resilience Mastery in Financial Services, which shows us how the financial services industry has recently responded and reduced cyber incursions. While this report looks only at one industry, the remarkable successes we see in the responses of the financial giants can be replicated in other industries as well. Yes, Virginia, there is hope.

What does success look like? "The study notes that financial services firms stopped 81% of breach attempts during the timeframe of the most recent study, up from 66% during the timeframe for last year's study. It's not surprising, then, that more than 80% of executives surveyed expressed confidence in their security protocols across all technologies and capabilities [from the Advisen summary]."

More good news: the Accenture survey also shows that other industries are catching up with financial services. Consumer goods and services and the life sciences were also noted in the report. Unfortunately, the arms race against newer, more sinister hacker techniques never stops. The report notes that we all need to look to increasing investments and efforts:

The cyber threat isn't going away, any more than bank robbers, muggers, and other crooks are going to disappear, but we can fight back and do so effectively. Each new breach is a learning opportunity for the good guys. Cities, for example, are rethinking cyber security after the very expensive smash and grab attempt in Atlanta a few months ago which we profiled in these august pages.

Frederick the Great of Prussia (1712-1786) had a one word motto on which he built the new Prussia in the 18th Century: Durchhalten! Never let go. Probably a good idea today in all our cybersecurity efforts - never let go.

Confused about Hiring, RTW, and Obesity? You Understand Perfectly!

Obesity and its impact on workers' comp costs and lost time has been a frequent topic in these pages. See Want Co-morbids with that Frappacino?" in our last issue as one example. One obvious question is to what extent can employers try to reduce their exposure to seriously obese employees through hiring? Attorney Scott Cooper, writing in Mondaq, has provided an up to the minute summary of where the US and state courts are in determining how obesity, ADA and related state laws interact. In three little words: it's a mess.

Cooper looks at one particular case [Casey Taylor et al. v. Burlington Northern Railroad Holdings Inc. et al., Case No. 16-35205 (9th Cir. Sept. 17, 2018)] as a microcosm of the cross currents we see throughout the legal landscape concerning the intersection of obesity and ADA. In short, different Federal circuits and state courts have come to very different conclusions. Is obesity itself a "disability" under ADA and, if so, is it due to a physiological disorder or condition, thus qualifying the situation for inclusion in the ADA defined "interactive process" and questions of reasonable accommodation? Or not? While the Taylor case involves a new hire, bear in mind that parallel issues, equally unclear, apply to returning obese individuals to work after an on the job injury.

The point, gentle reader, is that employee obesity - which has been shown time and again to increase comp claim costs as a co-morbid condition - is embedded in an increasingly complex set of legal issues. You can't tell applicants or claimants trying to return to work, "sorry, you're too fat to work here."

What you can do is work with safety and ergonometric experts as well as your ace claims people to develop ways to use the talents and skills of existing obese employees and new applicants in ways that are safe for them and less likely to drive up on the job injuries and costs. That's a win-win whatever the next circuit court decides. It's also a really good idea when we have both a full employment economy and an aging workforce. Unless you're hiring supermodels, don't expect all your people to be skinny.

[Note: as always, our essays in the GB Journal are not intended to be qualified legal advice.]

Quick Take 1:
The Rain in Spain Falls Mainly in... Texas?

A quick note on our tax dollars at work. The National Oceanic and Atmospheric Administration has just reclassified 100 year rain events in the Houston area as 25 year events. They expect that extreme rain events will become much more common in the region around Harris County.

A caution for us all: hydrologic maps are changing nationwide as the Harris County example reminds us. Have you rechecked the latest classifications for all of your locations recently? Weather-related and geologic exposures used to be constant, the same today as 50 years ago when your facility was first built in Flower Mound or Quaker Bottom (in TN and PA, in case you're wondering). As new storm and earthquake patterns are reminding us, the only constant is change itself. Today's action word - update.

The US Department of Transportation has just released its first joint, multi-modal guidance document for on-road surface transportation automation. In short, the Feds are now prepared to recognize developed self-driving systems as "drivers" under the law. In Fed-speak: "…the Department will interpret and, consistent with all applicable notice and comment requirements, adapt the definitions of ‘driver' or ‘operator' as appropriate to recognize that such terms do not refer exclusively to a human, but may include an automated system."

In terms of actually putting fleets of self-driving vehicles on the road for day to day functions, as opposed to small numbers of experimental units, this is huge. The technology is moving ahead, based on exhaustive real-life testing, and, as this example shows, laws and regulations are catching up. The driverless truck is about to pull up outside your office.

One new driverless prototype coming soon to a highway near you. Ready? 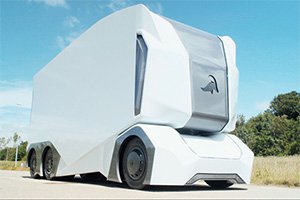