Health and Architecture; Beyond Tape and Shower Curtains

Not a regular reader of The New Yorker? The June 17 on-line issue may be worth your time. Kyle Chayka's essay, "How the Coronavirus Will Reshape Architecture," provides some thought-provoking ideas about the many ways in which industrial/office architecture is likely to change, beyond the obvious tape and Plexiglas accommodations we are all cobbling together today. The author asks a very sharp question: what kinds of spaces are we willing to live and work in now?

The first part of the essay looks at COVID's impact on home design, but the second part, more to our purposes, looks at offices and then the cityscapes in which those offices are embedded. "COVID-19 calls for prophylactic design," Chayka notes and goes on to point out that, today, "Tape is one of the greatest materials in architecture." He looks at how Cushman & Wakefield has redesigned their office in Amsterdam to go from housing 275 people to a rotating population of just 75 under the post-COVID dispensation.

Office design was beginning to pull back from "densification" before COVID, of course, but plague induced changes may go well beyond the incredible shrinking cubicle phenomenon. For example, is the open office concept dead for the likely future? "Hot desking" as well? The essay notes that spaces designed for the deaf at Gallaudet University may offer clues for new work stations more suitable for COVID and we'll have to become "hyper-aware of the infrastructure of cleanliness."

You probably won't be asked to re-architect company spaces yourself, but as the risk manager, you certainly should be part of the re-design process. COVID suppression is really pure management of emergent risk, so reading around in the ferment of new ideas for the socially distanced working space could be time well spent. 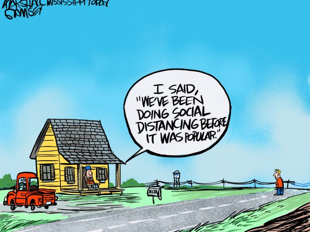 Confused by California's ABC Tests? Get in Line.

Proximity to major earthquake faults may be dangerous to your mental health. This week's exhibit for the "California Effect" is the legal fallout from the recent AB 5 legislation which set out to determine, once and for all, who is or is not a "contractor" for various legal purposes, including workers' compensation, as well as other employment-related benefits. A recent post on ITL by Mark Webb begins with a comforting thought: "California is making a mess as courts, the legislature and possibly voters sort out who qualifies as an employee and who as a contractor."

If you have operations in the Golden State, you need to know what's going on around the innocent sounding concept of ABC tests. Here's the deal: "The ABC test as codified and amplified by AB 5, now Labor Code § 2750.3, is a complicated set of outright exemptions, quasi-exemptions and – as was seen with the case of various freelance artists and writers – exemptions that were illusory in the face of the reality of such work." While you may not have a troupe of artists and writers to worry about, they became the leading test case for whether AB 5 can be made to work. The initial indications were, shall we say, negative. Oh - and artists and writers are not people to take having their livelihoods messed up in silence.

When the legislature returned in 2020 (pre-COVID), there were dozens of bills introduced to delay, modify, or outright repeal AB 5. These bills are many and various and only a few look to have legs in the legislative process, but the end product of this confusion may have a major impact on the nation's largest labor and workers' comp market. As Mark Webb says in his conclusion: "Why are we doing this? It is an epic public policy failure to suggest the only distinction between an entrepreneurial worker and an exploited one is whether 21 senators, 41 Assembly members and one governor in Sacramento decide to issue a pass." In other words, yeah, it's all pressure group politics.

So perhaps the best advice for dealing with this fiasco comes from Puccini's wonderful opera, La Fancuilla del West (The Girl of the Golden West) when the crowd at the saloon up in the Sierras belts out - "A Sacramento!" (Let's go to Sacramento!). We may well wonder how amenable this situation is to being resolved by remote control - or will it require some face to face, frank and earnest discussion? A Sacramento indeed. 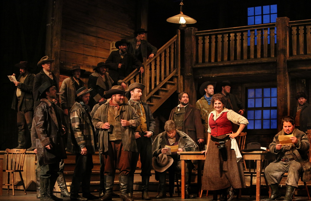 OK, class, here's your reading assignment for this month: Resilient by Design: Creating Businesses That Adapt and Flourish in a Changing World by Joseph Fiksel. The subtitle is a bit of a spoiler, so you already know what it's about. Dr. Fiksel wrote the following in 2015: "Sudden natural disasters and unforeseen supply chain disruptions are increasingly common in the new normal. Pursuing business as usual is no longer viable, and many companies are unaware of how fragile they really are." I'd say his crystal ball has 2020 vision, pun intended.

He recently presented his ideas in a webinar hosted by The Risk Institute of The Fisher School of Business at Ohio State* and his ideas are strikingly relevant, especially in the area of supply chain risk and the issues involved in "re-homing" supply chains. The book is chockablock with relevant examples and case studies. He is one of the leading experts in enterprise resilience and sustainability, and Resilient by Design offers a confident path forward in a world that is increasingly less certain.

Which leads us to SCRAM, a Supply Chain Resilience Assessment and Management tool developed by researchers at Ohio State. SCRAM is a facilitated process, supported by a computer-based tool kit, that provides a diagnostic assessment of an organization's preparedness and fitness for coping with turbulent change. Might you need something like that? Resilience won't knock on your door and politely ask to join your enterprise. Dr. Fiksel and the SCRAM team tell you how to find it, how to invite it in and make it at home.

*Full disclosure - your humble scribe has also presented at this august forum. If you aren't tracking this series of top notch, on the air, lectures and discussion of current developments in risk management, well..., why not?

News from the 2020 CLM Workers' Compensation and Retail, Restaurant and Hospitality Conference, courtesy of Safety National: the legal concept of "negligent security" is becoming more widely accepted. What does that mean? To oversimplify, it means that if a shooting occurs on your premises, you may have some legal liability even if the incident was unrelated to your business operations. More and more, you have a duty to foresee and defend against such events.

The article referenced above has a neat summary of how you can defend yourself from such claims, both before anything happens and afterwards, if the worst occurs anyway. There are, for example, four tests to determine "foreseeability," should you have reasonably anticipated such an event - the Imminent Harm test, the Prior Similar Acts test, the Totality of the Circumstances test, and the Balancing test. The author continues with a series of ideas for how to minimize the damages if such an event goes to trial. While the focus of this treatment is on the retail and hospitality industries, the same ideas apply to any commercial premises where your employees, your customers, or even members of the public may be present.

Should you worry? Well, here's some information compiled by the government: "The Office of Victims of Crime statistics reports that the numbers [of mass shootings] are trending upward. Over the past 10 years, the number of mass shootings was 2.4 times greater than the previous decade - from 1998 to 2007. Of those that have taken place between 2000 and 2015, the majority were in businesses." Yeah, that sounds kind of worrisome.

So - do you have the right liability covers in place in case the bullets fly? Have you taken reasonable care to prevent/discourage such events? Do all of your people know what to do if they hear shots ring out? Bear in mind that deadly violence can happen anywhere. As Isaac Asimov warned us: "Violence is the last refuge of the incompetent."

p class="body">Some Ryuk on your Maze, perhaps? Ransomware is getting worse, not better. The newest variant is Maze which captures very private data and threatens to publish it on the internet for all to see. Ryuk, another variant, is being used especially against both servers and workstations in mid-sized organizations. Other new selections in the malware of the month club include DopplePaymer, Sodinokibi, Revel, and Netwalker. Even so, we still hear in the IT press that many organizations remain unwilling to invest in malware detection and eradication applications.

So maybe ya gotta see all yer off-hours browser queries in the headlines, where yer spouse and yer boss can read 'em-- is that it? Then ya get in gear?

Ils se considéraient libres et personne ne sera jamais libre tant qu'il y aura peste, peste et famine.
They considered themselves free but no one will ever be free as long as there is plague, pestilence and famine.