The answer may surprise you. After all, the oldest millennials are just starting to stare at the big four-oh looming in a year or two. The bloom of youth should still linger on their cheeks, right? According to a new, comprehensive report from Moody's Analytics and the national Blue Cross/ Blue Shield (BCBSA) organization, such is NOT the case.

"The health of millennials is nearing a state of crisis," according to the report. The real takeaway statement:

Millennials are significantly less healthy than were the Gen X's and the Boomers at the same stage in life. If workers' comp is in your bailiwick, that list signals one thing - co-morbid conditions and lots of them.

Your faithful War Baby correspondent sees some serious rethinking about comp as the millennials, who are now the largest component of your workforce at 35% on average, march or slouch into middle age:

The most important survival skill of all in our current era is mental flexibility and learning new ideas and techniques. We're beyond out of the box thinking. As this new report underscores so clearly-there is no box left when younger employees present greater chronic health challenges than their older colleagues. What worked just a few years ago may be counterproductive today - and especially tomorrow.

Is There a Doctor in the House?

No? Maybe you're in California. The Golden State, which seems to get to the future before anyone else, is bumping into a doctor shortage. According to the Sacramento Bee, a new audit of The Division of Workers' Compensation in that state finds that arranging second medical opinions under the state regulations is taking months and months nowadays. Why? It appears that requests for new opinions are up 37% while the number of available physicians on the state's panel is down 12%.

As the Bee's well written article notes, explanations for this issue differ, but what we want to note here is that this problem in California (where they can't keep the lights on, after all) may be another straw in the wind presaging a more general shortage of physicians nationwide. A press release from the Association of American Medical Colleges (AAMC) earlier this year noted that "the United States will see a shortage of up to nearly 122,000 physicians by 2032 as demand for physicians continues to grow faster than supply, according to new data published today by the AAMC."

We are looking at a real example of a perfect storm here. The phrase is overused but it's on the money in this case. We have: (a) US physicians are retiring in record numbers, (b) fear of astronomical student debt is keeping young people out of medical schools, and (c) an aging US population needs more medical services per capita every year. As noted in our first item above, millennials are adding to the crunch by being notably less healthy than their parents' generation.

How to keep medical services flowing for your workers' comp program? As we've noted many times, forget about the paper discounts and a doc on every street corner PPOs. Targeted narrow networks with proven providers who know and want comp business plus aggressive claimant direction (as allowed locally) is the only feasible solution. Work with organizations that build solid relationships with their panels, pay promptly and fairly, and avoid the incompetent sleazeballs who thrive in the shadows of the system. This has always been good advice, but as the ratio of available physicians to sick and injured Americans drifts down, it becomes ever more urgent. 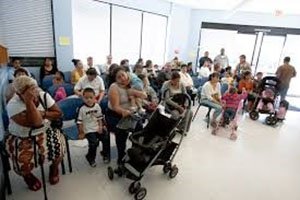 "But I wasn't on Medicare when I got here."
"I hear you. I wasn't pregnant either."

"SACRAMENTO - The California Department of Justice today announced that North Pole Enterprises, LLC, dba "Santa Claus" has been issued an investigative subpoena to address concerns over widespread misuse and improper collection of personal information. The potential numerous violations of the California Consumer Privacy Act of 2018 (CCPA) include..."

So begins Mark Webb's delicious parody of how California's new Consumer Privacy Act (CCPA) of 2018 might apply to a very surprised Kris Kringle. And what, you ask, might Santa be guilty of? Well, the list starts with the improper collection of biometric (includes whether you've been naughty or nice) and geolocation data (all those chimneys), plus faulty opt-out notifications, and, for the truly naughty, denial of services. Mr. Webb figures that for infractions just in California, Santa may be on the hook for upwards of $100B in fines and penalties.

Hmmm... What about your operations in the Golden State? North Pole Enterprises may be fictitious, but you're not. Read the whole item before you decide how humorous it really is. CCPA looks like a very large lump of coal in everyone's stockings.

Quick Take 2:
Just When You Thought It Was Safe to Go Back in the Water...

The pirates are back. Beefed up patrols and swift interdictions have made the pirate problem around the Horn of Africa fade dramatically, but the essential problem never really goes away. The Roman Empire struggled with a piracy problem in the Mediterranean for most of its existence and pirates tend to pop up wherever the pickings look good and the policing is weak.

This time it's the gulf coast of Mexico. Local pirates are going after the petroleum industry, attacking tankers, oil platform supply ships-the whole infrastructure of Pemex. Business Insider broke the story a couple of weeks ago. In the instance cited, an Italian flagged supply ship was intercepted on its run to a drilling platform. This was not the first such attack but it was the first with casualties when the pirates shot up the supply boat. Some 197 similar robberies took place in 2018, the most out of the past three years and a 310% increase over the 48 attacks in 2016. Those robberies cost Pemex at least $11.5 million between 2016 and 2018.

For the moment, this appears to be a problem for Pemex. The real question is whether it might spread. US oil platforms dot the Gulf north of the Pemex fields. Further, these sea born attacks are merely one more sign of a growing robbery/assault problem across Mexico, as this Journal has noted. Eighteen wheelers operating in Mexico are now routinely armored and their drivers trained in escaping attempted hijackings. If you have operations or logistics in Mexico, you'll want to watch these developments very carefully. Mexico is not yet a failed state, but as this news indicates, the trends are not good and they have potentially profound implications for US concerns operating south of the border. Can we all spell maquiladora? How about Hacer negocios en M éxico es cada vez más arriesgado*. 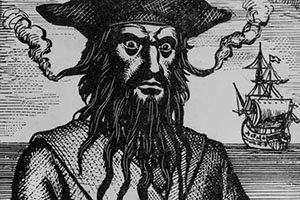 Pirates then - Blackbeard
(Yes, he did put lighted slow matches in his hair to look even more terrifying.)
(He probably smelled better, too.)

Pirates now (That's a 50 caliber machine gun on the bow.)

*Doing business in Mexico gets riskier all the time.

Success in risk management often depends on catching angles most people miss, as in: "The main reason Santa is so jolly is because he knows where all the bad girls live." - George Carlin.