No - no one has to sing or dance, and considering the folks we know in risk management, that's probably a good thing. But what about finding, recruiting, and keeping talent in risk management and in the larger ecosystem we all inhabit along with brokers, TPAs, carriers, and consultants? This Journal has looked at several issues under the very broad title, the Silver Tsunami, in the last year or so but the one closest to home is the ongoing retirement of so many of our colleagues. Like other Boomers, risk and insurance professionals in all parts of our complex system are hanging up their cleats.

One of the bright lights in our business has long been Barry Bloom, a master of workers' comp, California style, since 1978*. As you know, California comp is as close as our risk discipline gets to quantum physics and it may well be where Heisenberg picked up the uncertainty principle. Barry recently published a striking thought piece with the modest title, "The Existential Threat of Talent Risk in Workers' Comp and Why It Can't Be Ignored". While the focus is comp, you should substitute Commercial P&C Insurance and Industrial Risk Management to get the full impact of his argument. The same problem is common across our entire ecosystem of risk.

Barry's thesis is simple and, we think, undeniable: "We are confronting an existential threat to the long-term viability of our industry due to the huge and complex passing of the torch to subsequent generations." He goes on to point out a truth so obvious that we usually forget how powerful it is: "The current economy and workforce has significantly more options from which to choose. Claims, risk management and work comp compete with other industries perceived to be 'cooler' than professionals focused on saving, holding and protecting money."

Try this little thought experiment. How many nine to eleven year olds do you think you would have to ask the classic question "what do you want to be when you grow up?" before one of them says, "a risk manager or an insurance broker"? Would you then feel compelled to refer the kid to Child Protective Services? Be honest.

The article is well worth reading in full and you might seriously consider joining the panel discussion Barry points out- "Passing the Torch Without a Stumble: The Coming Decade of Transition from Old to Young" at the National Workers' Compensation and Disability Conference, including live Q&A, which will be held on October 21st from 3:30-4:30PM EST (same website referenced earlier). Our Journal is not in the business of providing plugs for events, but this one really does deal with a true existential threat and it features a top flight panel - and it's free! Yeah, we'll be there too.

*Plus other arcana of the insurance world. Your humble scribe started in this crazy business in 1976 as a third career. So far, it seems to be working out. 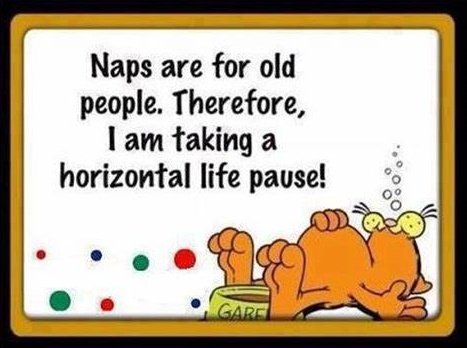 Is this the future of risk management?

A music critic once compared hearing a new concert piece by Sir William Walton* to driving up to a large, ornate building on a foggy evening. The closer you get, the more you see until, finally, you see the whole thing. That metaphor has some application to our ongoing experience with COVID. Little by little, we see more. A recent WorkCompCentral webinar gave us a look at a few more facts about how COVID is interacting with comp in Florida. Note that all observations on COVID are provisional as we learn more daily about the disease itself and how to handle the claims it causes. The following, then, is a report from the front, not a wrap-up ready to become a textbook chapter.

This summary appears to agree with the partial reports we hear from other jurisdictions suggesting that COVID, for all the systemic disruption it is causing in our daily lives, may be just another cause of claim inside the workers' comp process. Yes, it requires special attention, particularly in states where regulations have been modified to deal better with COVID-related claims and to define presumptions for certain classes of essential workers, but we see no signs thus far that COVID claims themselves will seriously disrupt claims systems or drive an unusual or large array of cat claims.

Like listening to Walton's music, handling COVID claims can take some getting used to, but it is ultimately not as dissonant as we feared. And note that we can all take a bit of advice from Sir William who observed that he constantly revised his compositions even as he wrote them. "Without an India-rubber [eraser], I was absolutely sunk."

*Check out one of his best, the anthem Crown Imperial written for King George VII's coronation.

Don't you just hate it when traffic interrupts a really interesting conversation? You're just getting the serious scoop from your bud when you see a One Way sign - pointing the other way. New research just published by Cambridge Mobile Telematics (CMT) tells us that 37% of car trips studied in 2019 included one or more episodes of distracted driving. A Nationwide poll tells us that 66% of consumers believe that distracted driving is a major cause of accidents.

Here's another area where new developments in retail insurance may well have commercial applications. We are all familiar by now with those "monitors" we plug into the dashboard to qualify for safe driving discounts*. Well, Nationwide and CMT have a new and improved version of their plug-in, called SmartRide, which picks up on distracted driving as well as the usual suspects such as hard braking and cornering and excessive acceleration. According to Hari Balakrishnan, Co-Founder and CTO of CMT. "Our smartphone telematics platform helps drivers understand and reduce their risky and distracted driving practices."

There are already some devices, like two-way dash cams, that can detect distracted driving in your commercial rigs, but might a solution like CMT's be more effective? Or might having something like this in addition send an important message? A loaded 18-wheeler is about 80,000 pounds. Even your local delivery vans can run 5,000+ pounds. Can you be too careful?

*Just got a $10.00 credit on my personal auto policy for not driving my 2007 Subaru Forester like a Grand Prix car. Not that I'm tempted. 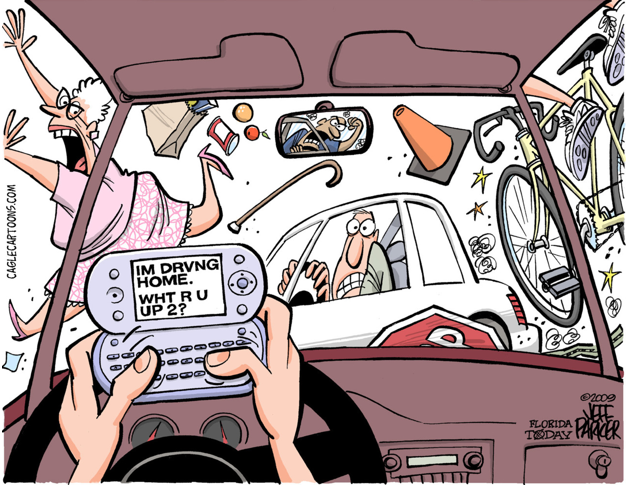 The last frame from the dashcam.

Back in 1999 futurist Ray Kurzweil predicted that human life expectancy would soar past 100 years in 2020. He also predicted that computers would be invisible and books and paper would be dead, gone the way of the passenger pigeon. Hmmm. Closer to home, in 2019 many in various aspects of the risk business expected 2020 to see moderating premiums and a generally upbeat insurance market. Alas, the future just isn't what it used to be.

Let's take a look at the major factors that have pressed on the markets so far this year (and we're not even done yet). R&I and Liberty have provided us with one of their nifty everything-you-want-to-know graphics. (For a higher resolution version, click here) 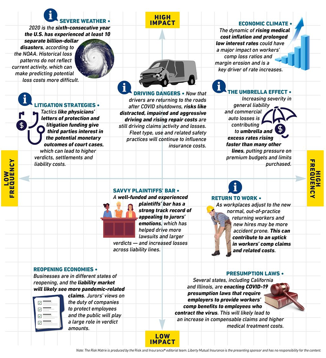 We have commented on several of these factors in previous issues of the Journal, but here you have them in one place. Inspiring, eh?

We aren't living to 100 yet either, but if you're a risk manager, 2020 may make you feel a great deal older than the calendar suggests.

Just when it looked like telemedicine would ride in on a white horse and help rescue us from the COVID dragon, we get this (from workerscompensation.com):

The U.S. Department of Justice District of Montana has announced charges involving telemedicine fraud and illegal opioid distribution schemes that resulted in over $6 billion paid out on fraudulent claims. According to a statement from Justice Department's Criminal Division Assistant Attorney General Brian C. Rabbitt, there are 345 defendants charged across 51 federal districts with over 100 licensed medical providers, including physicians ...

All you need to know about the insurance news from an ITL column by Paul Carroll:

Today's announcement that Bold Penguin is acquiring RiskGenius marks a milestone in the maturation of the insurtech movement.

Yep, that's right. No typos. If you follow insurtech, check it out at ITL.