Murder Risk and the Android

When "Murder and the Android" appeared on NBC's Sunday Showcase in November, 1959, the action - a man stalked by his own android (humanoid robot) - was set 400 years in the future. Amazing how fast four centuries can flash past. Androids walk - or more likely, roll - among us now*. For example, here is a snapshot of All Nippon Airways new "telepresence robot" called Newme as it assists travelers in a crowded airport. OK, dear reader, here's the scenario. A manager from ops (store ops, warehouse ops, or any other ops you might have) calls to let you know that they have decided to start using customer interfacing robots. This could be any capacity from advanced chatbots to humanoid in store customer assistants like these:

Now what do you do? How does risk management embrace robots which (who?) interface with customers, not just labor on the production line? First, let's survey the scene. AI Advantage newsletter published a very good overview of the current roles of robots across various industries and uses, from retail customer assistance to customer banking relations. Banks in China, for example, are making extensive use of robots now and the first banks designed around robots have opened there recently.

As the overview makes clear, robots now have a very wide variety of customer centered tasks. On any given day, even if you don't see one, you may well be talking to one. But what about the risk side? Oddly, relatively little has been published concerning overall risk mitigation strategies where customer facing robots are concerned. So, ever the public servant, your humble correspondent has pulled together a few pointers from various sources to provide a starter kit of ideas:

*Your intrepid reporter deals with the Marty robot (below, next to the frozen chickens) at the local supermarket at least once a week now. They aren't coming. They're here. 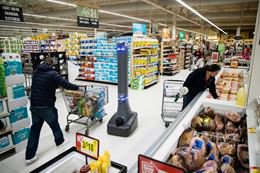 Telehealth - At Last, Some Research

This Journal has been tracking the development of telehealth since we began publication. One ongoing source of frustration in talking about when and how telehealth methods might offer an attractive combination of real clinical benefits and lower costs has been the lack of substantive research. Well, our friends at ODG have been working on this and they have just published a white paper which brings together the best current work on telehealth in treating musculoskeletal conditions. Not surprisingly, the results to date are mixed.

We can start with the fact that the Feds (Medicare) and the states (work comp et al) naturally disagree about many aspects of what can be done legally using telehealth technology. In most cases, the regs are a bit different but in some cases they are essentially contradictory. Anyone trying to make sense of the uses of marijuana in workers' comp medical treatment will find this situation all too familiar.

But the critical questions center on what types of telehealth interventions seem to be working. From the white paper: Telehealth or tele-rehabilitation may be considered as an option only when adequately tested and appropriate resources are available, for the following situations and conditions:

Telehealth or tele-rehabilitation cannot be recommended for the following conditions:

Oddly enough, the research to date appears to show that telehealth has demonstrated better outcomes dealing with lower extremities than with upper extremities. The evidence concerning lower back complaints, alas, has been disappointing.

The ODG white paper covers far more than we can summarize here and it's well worth a read for anyone wanting to optimize the use of telemedicine, but the general message is quite clear. Telemedicine has some very good and proper uses but it is not a panacea. It has to be used very selectively and we are beginning to build a corpus of solid research that allows us to make those calls intelligently.

New ideas and research are constantly coming to the fore, so consider this paper a work in progress and confer with your claims people from time to time on where and when to deploy telemedicine. One thing several studies have shown is that patients really like the convenience of virtual consultations and the rehab aspects of telemedicine - ongoing monitoring and encouragement of clinical compliance, person to person, even if through a screen - have real power in helping people to help themselves in the recovery process. Heck, that's worth a couple of cheers all by itself.

We've all learned a great deal about opioids, oxycontin, fentanyl, and that crowd, right? TPAs, carriers and state comp bureaus are getting a much better handle on these drugs now, but we're still playing Whack-a-Mole as new offenders pop up. Today's new drug of choice may be gabapentin.

Whazzat, you ask? Gabapentin (Gralise, Neurontin - brand names) is an anticonvulsant medication, normally used to combat seizures, but it can be effective against certain types of neuropathic pain and restless leg syndrome. Well, that's the kicker. A new report by Quest Diagnostics, Health Trends: Drug Misuse in America 2019, shows that "Gabapentin is now one of the most widely prescribed medications - and subject to increasing misuse." Side effects include dizziness, sleepiness, slow reflexes, fatigue, and a "sedated state." Just what you want on the job site, right?

What we are dealing with, over and over, one part of the pharmacopeia at a time, is a social and philosophical problem with how to manage pain. Not that long ago, we expected people to work through and around "normal" pain. When your reporter was eight and broke his arm in 1953, the orthopedic surgeon had the bawling little boy set it himself, no anesthetics involved. (True story. The lesson worked. I didn't break my arm again.) But nowadays there seems to be a society/ culture level agreement that pain is to be banished. No suffering allowed.

As long as we try to eliminate all pain, some drugs will undoubtedly be abused. It's up to you and your claims people to implement and maintain state of the art controls on physician prescribing, pharmacy dispensing, and close oversight of claimant compliance, as well as humane dependence cessation programs. Together, we'll rein in gabapentin. Wonder what's next? "Numbing the pain for a while will make it worse when you finally feel it." - J.K. Rowling

Quick Take 2:
You Knew This Was Coming, Right?

One more arrow for your worry quiver: several manufacturers are developing breathalyzers for marijuana/ cannabis/ THC. Despite the legalization of medical marijuana in some 33 states and recreational use in 11, driving or operating heavy equipment while under the influence is still prohibited, as well it should be. While the jury is still out on the long term health impacts of THC and related compounds, no one can argue that the stuff makes you a better driver.

The new devices will be coming to market soon, but there is no legal consensus on how to deploy them. No "safe limit" or intoxication level equivalent has been established. Every state has a hard and fast limit for alcohol. No state has a similar limit for marijuana or THC. There is broad agreement that such limits need to be set and enforced, not only for driving big rigs, for example, but also for operating things like cranes and bulldozers where a moment's inattention or a lapse in depth perception can have catastrophic consequences.

Stay tuned. This looks to be a fast developing area in both legislation and in court decisions. Have you updated company policies to stay current, worked beyond your long standing urine testing for new hires?

We've all dealt with blood alcohol levels for years. Now a blood THC level may be just as important. For years pot heads have been a staple of movie and TV humor, but they are remarkably unfunny when someone gets seriously hurt. Every loosening of marijuana related laws is a risk management event.

"In this report (Health Trends: Drug Misuse in American 2019), we'll uncover key fears and challenges facing physicians today, including:
62% of physicians fear we will be trading the opioid crisis for another prescription drug crisis.
51% of patient test results from Quest Diagnostics show signs of misuse."

Think about that, friends.