In the year 344 of the Common Era, risk management for a trip from Castle Mor* in the Highlands down to Londinium, the Roman capital of Britannia, was simple:

Devontus and his cousin Lugbynum acted as guards. Even with Togo long gone, a few desperate men still haunted the roads of Britannia. Having two expert archers along felt good. Quintus had his boar spear and gladius as well. Ainya’s nurse and their supply horse brought up the rear of their caravan.

A sword, a spear, couple of archers, and a pack horse and you’re ready to go. It’s a little more complicated now.

A recent article in The Guardian takes the bank collapse of 2008 and the potential crisis in our current international food system as examples of how risk works in very large, closely coupled systems. While you may not be in banking or in food**, this essay provides a real, eye-opening introduction to new ways of looking at multi-player risks. Global finance and global food are both examples of complex systems and all such systems have certain characteristics in common: they self-organize out of a mass of individual transactions, they are resilient under most circumstances, but if they are closely coupled and dominated by a small number of companies, certain shocks can propagate through the system quickly and each has a tipping point or critical mass of disruption beyond which a chain-reaction failure becomes distinctly possible.

“Scientists represent complex systems as a mesh of nodes and links. The nodes are like the knots in an old-fashioned net; the links are the strings that connect them.” Now here’s the kicker. Resilient complex systems have lots of nodes and relatively elastic links. But if certain nodes become dominant, start to behave in similar ways, and are strongly connected, the system is likely to be fragile. A case in point in 2008 was the very small number of global banks which dominated finance world-wide and which were closely coupled through a maze of counter party agreements. When one failed, that part of the system had very little resiliency. We all remember what happened after that.

We recommend reading this essay on risk. The author may or may not be right about how this applies to situations in today’s headlines, but his work—and many of the secondary articles linked inside the essay—offer a quick overview of an important, broad-gauge way of understanding risk which goes beyond the often atomistic way we all have to think day to day. So often every part of our enterprise risk plan has its own little galaxy of brokers and carriers and loss consultants, and this makes it difficult to step back to view the systemic risk inherent in our industry vertical.

The author, George Monbiot, offers some ideas about how one major complex system might be modified to lower inherent risk. How many of his ideas might have application in other complex systems?

Ask yourself—would you take your family skiing in the French Alps, or the little mom n’ pop resort in your local mountains, without checking the weather and avalanche forecasts? An avalanche is simply a catastrophic failure in a normally resilient complex system of snow, rocks, trees, and weather. It’s a pretty good metaphor for systemic failure and it’s not a ride you want to take.

**Need we say that we’re all involved in money and food in some way, so these examples hit close to home regardless of your industry vertical. 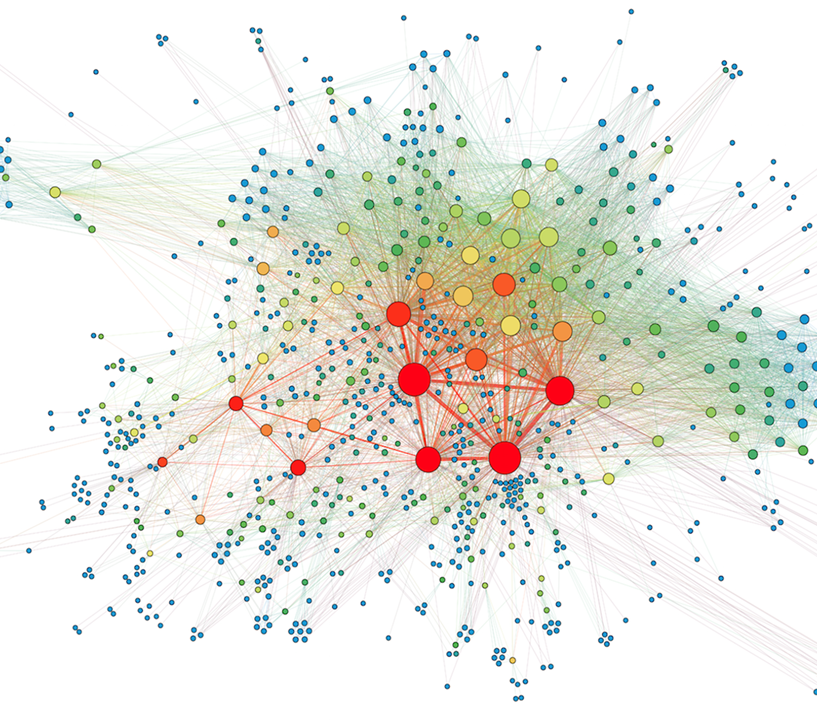 A complex system: those big red circles are the critical part of this system. If they are too dominant and too tightly linked, this system might be fragile.

Ever been treated by a chiropractor? Our own experience in being treated by a chiro was all good. The adjustments worked and after a handful of visits we went from being bent over like a hairpin with excruciating lumbar pain to being fully bipedal again.

The Workers’ Compensation Research Institute (WCRI) has just published a 124 page (!) report, “Chiropractic Care for Workers with Low Back Pain.”* Chiros have an odd place in the panoply of providers we use in treating workers’ comp cases. The WCRI research report takes a “just the facts” look at how chiropractic care actually works in real comp injuries. The results, complete with graphs and tables, are impressive.

The two findings which we think are most important and which deserve the attention of anyone managing a comp program are:

To oversimplify a good deal of sophisticated research, employers seemed to be directing their injured employees into more expensive, longer duration care while employees, left to their own choices, went to providers who got them well sooner and for a lower cost. Can we all say “counterintuitive” now? It’s just possible that injured employees who opt for the less conventional treatment may well be more motivated to return to work and just might feel less need for opioids in the process. And keep in mind that in many rural areas, physical therapists and orthopedic specialists are harder to find. The chiro down the street may be the more logical choice.

The report also notes that a controversy arose back in the 1990s concerning some chiropractors overbilling, which may explain a lingering hesitation by some employers or their claims handlers to refer to chiros, but this is, effectively, ancient history. The WCRI study challenges us to rethink opinions which may be seriously out of date.

In risk management many of us have long memories and this may be a useful reminder to all of us to stay current. After all, not long ago, drug costs in comp were spiraling out of control, not to mention the overuse of opioids. While drug costs and opioid use are still serious plagues in parts of the US today, they have both largely been rooted out of comp** by the concerted actions of carriers, administrators, and regulators working together.

If you have been leery of letting your injured employees seek treatment with chiropractors, in our personal opinion, you may be hanging on to a phantom of the past. If you have a well-managed, properly vetted provider panel, you may not need to worry about those injured employees who select to treat with chiros. That’s our own takeaway from this, as usual, excellent research paper from WCRI. Funny how instructive mere facts can be.

Finally, an orthopedic surgeon once told us that he freely referred patients to both chiropractors and physical therapists because these practitioners still remember that the original and most essential part of healing is the therapeutic touch, the laying on of hands of our ancestors. Despite electronic everything, the human body still responds to a healing touch.

*Free to WCRI members on their website. Not a member of WCRI? Aw, com’on, man.

**A subset of legacy claims are, of course, a notable exception. 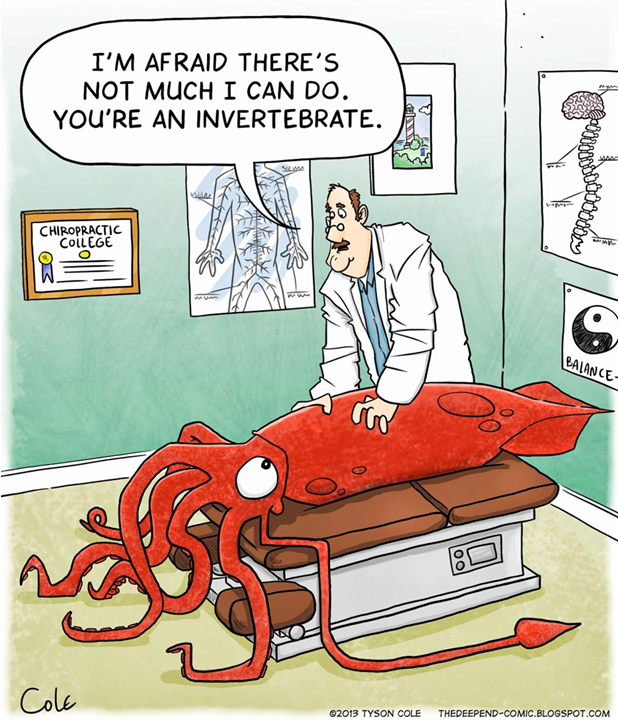 True—chiropractic is not for everyone.

“If you think about the long term then you can make really good life decisions….” Got that from a guy named Jeff Bezos. Might bear thinking about.

An article in a recent issue of workerscompensation.com summarizes a longer article from The Harvard* Business Review which discusses taking the long term view of comp costs and ROI instead of looking for instant gratification in clinical quick fixes. For example, when does it make sense to waive a standard medical fee reimbursement in order to have an injured worker treated by a best-in-class physician? Or when is it worth stepping outside the usual clinical referral process to utilize an effective telemedicine program?

The thrust of the article is to encourage us to think past our default or habitual responses in managing comp medical provisions to look for the most effective long-term solution for a given claim situation. The original authors talk about other areas of reformed practice we should think about as well:

As a sharp-eyed comp professional, you’ll recognize that some of these ideas are already in place in some jurisdictions or may already be used for certain subsets of claims. The point of the Harvard piece is not to present a program for reform, but to suggest additional ideas and approaches which, while possibly messy in the short term, can have longer term benefits. These are ideas that, once implemented, can be researched by our friends at the WCRI (see above), so we’ll know what does or doesn’t work soon enough.

*Better known, of course, as the Stanford of the East 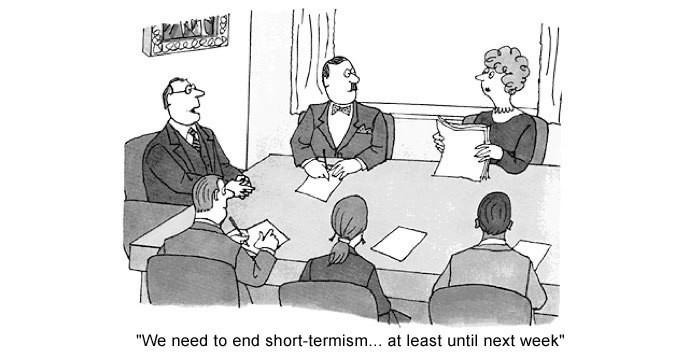 Quick Take 2:
Risk Around The Clock

As our faithful readers know, we love the snappy risk graphics published by Liberty Mutual. They convey a great deal of information very quickly and with a dash of style. The latest is Nine Critical Commercial Property Risks to Watch. Right down Risk Management Avenue.

For the version which is not an eye chart, go to Risk & Insurance . 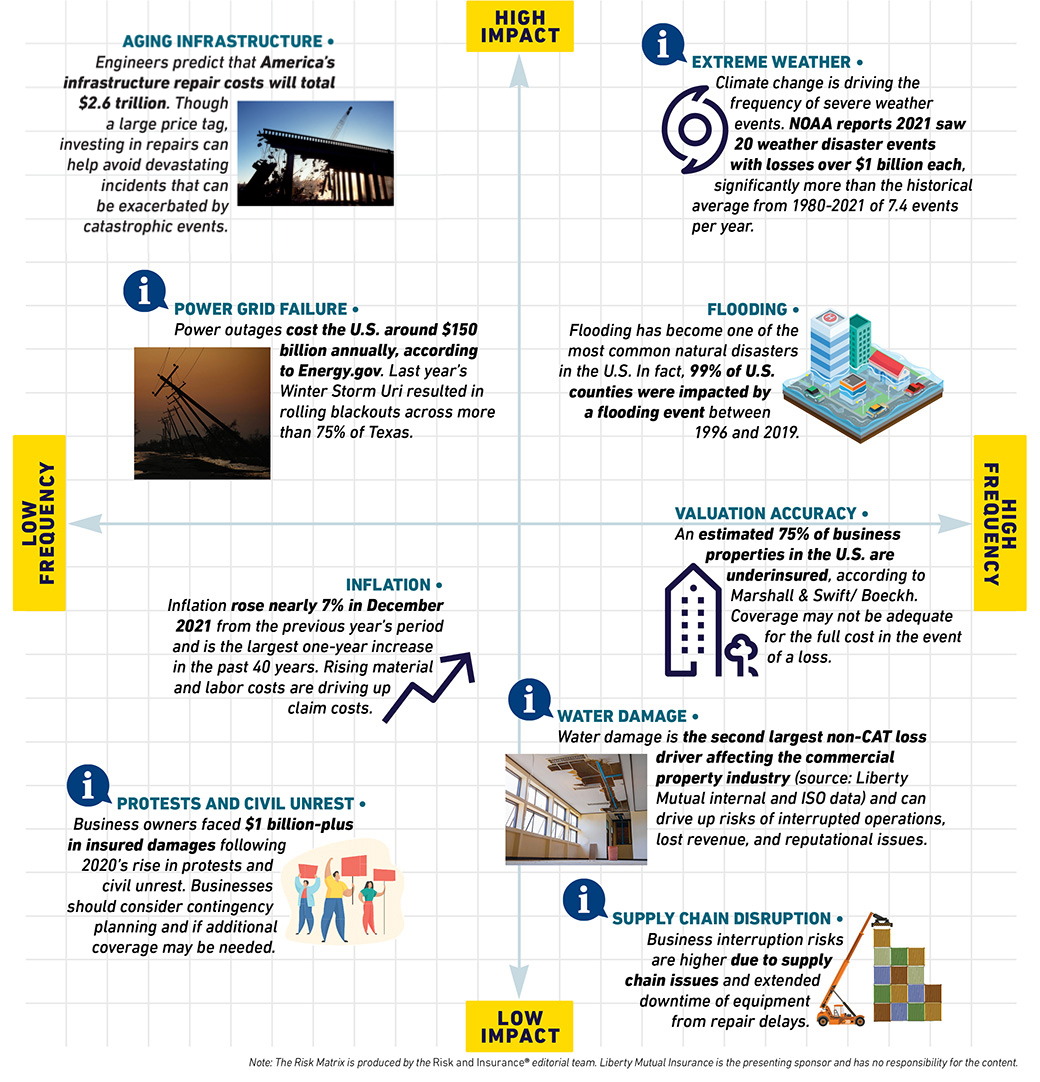 Say It Isn't So

Some animals are more dangerous to work with than others. Years ago, we had a neighbor who was the giant panda keeper at a major zoo, which is how we know that pandas look much cuter than they smell. In fact, panda breath may be a lethal weapon in its own right—but take our word for it.

In recent months we have seen accounts of zookeepers injured by various zoo animals, big cats, even a warthog. Oddly, one cat attack came from a cheetah, normally the most peaceful of big felines. Zoo officials think the fact that the keeper smelled of the giraffes he had been working with might have given the cheetah the wrong idea.

Just two weeks ago keepers at another zoo were attacked by the most dangerous of all animals normally found in a zoo. The police were called and the critter—making “unintelligible sounds”, then attacked the deputies. In the end “[his] actions were aggressive and unpredictable, and deputies felt the employees at Zoo World did a remarkable job keeping other patrons safe until deputies arrived,” the Sheriff's office said in its release.

The dangerous attacker was a large, apex predator best known as homo sapiens. Apparently this one was on the wrong side of the enclosure fences.

Having one of those complicated human bodies, which gets older every day to boot, makes all of us vulnerable to illness and injury. As risk managers we have to deal with this fact for whole herds of fragile humans as part of our job for workers’ comp and personal injury claims. Here’s a bit of proverbial wisdom that it behooves us all to keep in mind:

If you listen to your body when it whispers, you won’t have to hear it scream.