So, Where Will You Be in Five Years?

You know the classic interview question. You ask the dewy-eyed kid sitting across the desk with his or her brand-new resume, "where do you think you'll be in your career five years from now?" In most cases, there really isn't any right answer. You just want to know if they can handle an open-ended question without a melt-down. Well, maybe there is something like a right answer now, thanks to a major survey performed by RIMS in collaboration with Willis, Chubb, and The Hartford (RIMS membership or registration required). In essence, the survey asked a large number of risk management professionals, from students majoring in risk to seasoned corporate executives, what skills and abilities they expect to be predominant or required for RIMS members in 2025.

We all know that risk management is changing quickly now as the traditional relationship manager/insurance buyer model is being replaced wholesale by new talent trained in serious analytic skills and highly practiced in digital everything. The RIMS survey puts some particulars around what this means for both new entrants into the risk field and for professional advancement in coming years.

The survey sections on "Education" and "Challenges and New Skills" are daunting. Risk management isn't quite astrophysics (your correspondent's original major two generations ago, when the universe was smaller), but it's getting closer. If you don't write code yourself, you need to know how to work with the people who do. More interesting, however, are the survey results covering "Diversity & Inclusion." A key statement: "A diversity of perspectives is an effective way to bring everyone to the table and begin making the type of real progress that improves our organizations and demonstrates the value of our profession." The larger point is that the external challenges in terms of rapidly changing risks and exposures from the physical to the reputational will be too dynamic and far-reaching to be effectively dealt with by the "we've always done it that way" attitude of traditional management.

Finally, the report notes that 76% of the risk management students who responded felt confident that they would have the skills and abilities to deal with the coming challenges, but only 32% of the seasoned executives responding agreed. Whoa!

Well, no one said it would be simple. Stay tuned. Bulletins as they break.

A little over a century ago, the UK government began the then radical practice of hiring women to work in the munitions factories making artillery shells and bombs for the WW I war effort, freeing up men to go to Ypres, Verdun, Amiens, Vimy Ridge and other hell holes to catch the shells and bombs being cranked out by the Germans. These ladies came to be known by the quaint moniker "munitionettes." The legacy of the munitionettes is still with us because the war production boards tracked their productivity in detail, giving us one of the first fine-grained, multi-factor statistical portraits of a complex manufacturing process.

Dr. John Pencavel, an economist at Stanford University (so you know he's good), uses these early studies to open his 2018 book, Diminishing Returns at Work: The Consequences of Long Working Hours (get it at Google Play). While the emphasis of the book is on productivity and the various ways in which it tails off dramatically after about 40 hours in a given week, regardless of the industry or the type of work involved, there are some important lessons in here for risk engineering as well. Just read Diminishing Returns side by side with OSHA's study Long Work Hours, Extended or Irregular Shifts, and Worker Fatigue. What we see dramatically demonstrated in the stats is that as productivity goes down, rates of mistakes and accidents go up.

OSHA reports that "working 12 hours per day is associated with a 37% increased risk of injury." Why do so many employers and company cultures still worship long hours? Pencavel notes that some employers know the consequences of overwork on their bottom lines and their employees, though others are not, as he drily puts it, fully informed. "They have operated a certain way for a certain period of time and, if they are still in business, they see no reason to change things."

Our point is this. Have you been comparing incident and accident rates with average hours worked per FTE per work unit lately as part of your loss engineering studies? If not, why not? In loss engineering we look at every variable - weather, time of day, location, and so forth. What about hours on the job that week or even that month? Is inefficient scheduling driving any part of your accident rate? Have you asked your TPA to help you explore excessive workweeks as an exposure factor? Will you?

Bear in mind that the 2005 Texas BP oil refinery explosion, Three Mile Island, and Chernobyl all happened on the night shift. Oh yes - the Challenger space shuttle blew up at 11:38 EST, but the decision to launch, despite the 18oF record cold at the pad, was made late the previous night, very late.

In our post #metoo world we have to be much more alert to unfair discrimination, harassment, and bias in all their many splendored forms. This is particularly true for risk management because of the major compliance/regulatory and reputational risks involved in allowing sexism, racism, or other "-isms" to flourish like black mold in a damp basement.

An excellent survey and report by Hiscox Insurance lays out the issues involved with one of the most insidious forms of bias - ageism, the idea that old dogs can't hunt and should be passed over and edged out. The Equal Employment Opportunity Commission (EEOC) defines age discrimination as treating an applicant or employee less favorably because of his or her age. That's a pretty broad definition and ageism is often both "unofficial" (not corporate policy in any written form) and also pervasive, especially in some fast moving industries where the culture devalues wisdom and experience in favor of "move fast and break things."

Ageism is often a double-barreled bad idea. Not only does it lay your company open to EEOC action, civil suits, and loads of bad PR, it can also devalue and sideline many of your best contributors, shoving them into a corner or out the door because of a few gray hairs. BLS data show that 22.4% of your average workforce is now over 55. Who knows? You might be one of them, now or in the near future. What are you doing to eliminate ageism as a risk in your organization? Check out this report. Might give you some ideas. Can we all spell D&O, children?

Regular readers of this Journal (you know who you are) will recall that we like to forward some of the neat graphics published by Liberty Mutual. A month ago, we featured their Ten Risks for Workers' Comp illustration. This time we take a look at what are the new risks which are becoming more severe due to climate change. (For an expanded view, click here.) 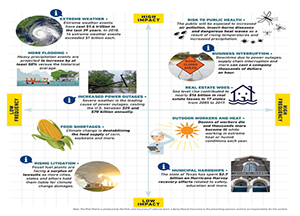 Note that most of the risks listed, such as flooding and power outages, point towards the larger category of business interruption. Ask any one you know from the Bahamas about weather related business interruption, for example. We are in an era when weather events literally redraw the maps. Climate changes all the time. A hundred million years ago, dinosaurs sunbathed at what is now the South Pole. But climate-geo-history also tells us that change can be very sporadic, occurring in sudden spurts. An ice age can start over a long weekend, literally.

This little graphic is a great tick list for checking your climate risk management planning. What enterprise policy/plan addresses each category? Be a hero: expect the unexpected. The south pole - a Jurassic day in the neighborhood.