That Special Human Touch - And How to Get Rid of It

In the time of COVID, humans become a major risk factor in and of themselves because virus particles travel from one person to the next, creating a potential chain of infection/transmission. What this means is that taking humans out of physical business processes whenever possible through automation suddenly has an even higher value than reducing wage costs. For example, robot cooks have been making slow inroads for the last 10 years or so, but most cooks aren't that expensive, so this has been an essentially erosive process (drip, drip...).

Now it's turbocharged. As the NY Post recently explained, using robots in the kitchen breaks one possible chain of infection. So, we now have "Sally," a robot salad maker which prepares custom salads based on the customer's use of an electronic menu. This neatly replaces the salad bar which will probably never come back. (Would you trust a plastic sneeze guard with your life?) Meanwhile, White Castle is developing "Flippy," a robot that does..., well, guess. They're making hamburgers. Add kitchen help and cooks to the list of entry-level jobs now vanishing from the economy.

Food prep is just one example of the many ways in which robots and other types of electronic interfaces are replacing people to interrupt transmission chains and the sky-high risks which can follow on after a demonstrated virus spread. Checked into a hotel recently? How close did you get to a real, live human? How about using an electronic menu, quite possibly on your smartphone, to order at one of the few restaurants with distanced indoor seating?

Construction workers are starting to wear hardhats with social distancing tech that sounds a warning if they get too close to each other. Similar devices are coming on-line for use in factories to keep workers apart. One such tool, called Proximity Trace, also assists employers in developing a roadmap for contact tracing.

In our last issue, we noted the new UV sanitizing robot recently deployed for the Greater Boston Food Bank - a double whammy which kills virus particles without introducing a potential new source, i.e., a human with a bottle of cleaner and a cloth. Heathrow Airport and several medical centers are using a parallel technology for the same purpose now.

The point for risk management is that every touch of one human to another, directly or via an intermediate object like a salad or a room key, represents a potential major risk event. Casual interactions that had no consequences in 2019 present serious exposures in 2020. The ROI calculations on robots and other forms of automation have changed dramatically. It's no longer a matter of eliminating a few low wage or mid-salary jobs. Automation is now central to managing potentially existential risks. That's a brand-new equation. Has your company figured that out yet? Have a Devil's Advocate on Your Risk Team?

Until recently, the position of advocatus diabolic was an official position inside the Catholic Church (Office of the Promoter of the Faith). The job of the devil's advocate was to argue against the case for canonization for new candidates. His purpose was to help the Church avoid awarding sainthood to the wrong people. Paul Carroll and Chunka Mui brought back this idea a few years ago in an important book, Billion Dollar Lessons. Corporations have been known to charge full speed into very bad ideas in part because no one had been designated to question dodgy data, half formed ideas, or off the wall assumptions.

Paul has a new essay on the topic in ITL which applies the concept to the plans we are all making for dealing with the post-COVID world. We all have to do this - tomorrow will happen whether we are ready for it or not - but who is questioning the fragmentary data? The assumptions? The logic? The SWAGs? Will (fill in the blank)________ come roaring back in (fill in the blank)______ months or will things change dramatically and permanently until (pick a year before 2100)____? One obvious and widely discussed example is business travel. Will our road warriors be back in the skies in droves before we know it or will jet liners be repurposed as hydroponic farms or high-tech condominiums?

The same idea - having a designated devil's advocate - can apply in risk management as we consider a host of new risk control and abatement options. As we have discussed in these august pages, whole new policy forms are coming on the market. Parametric options, until recently pretty exotic ARM ideas, are now flocking to the market (see below). Wisdom peddlers, like your faithful scribe, have been telling you to rethink everything. But whose job is it to ferret out the half-baked and separate the filet mignon from the bologna?

Maybe you need a serious devil's advocate on your team, the person who checks out every idea, researches the data, and finds every reason why a new plan may stumble badly. It's always easy to get caught up in groupthink, especially when events are pressing in rapidly on every side. What about you? Whose job is it to tell you (gently perhaps) that your stockings don't match this morning? Oh, and your ROI calculations have a major methodological error that skews the outcomes by an order of magnitude. Who tells you that? We don't do it exactly this way nowadays

One of our personal favorite philosophers, Winston Churchill, noted, "To improve is to change; to be perfect is to change often." COVID seems to be intent on making us all perfect, one lump at a time. Today's example is the coming to market of a variety of new pandemic risk mitigations. An article by Noor Zainab Hussain carried by Reuters looks at a variety of new insurance vehicles which can "pandemic proof" companies and projects. Both major carriers and brokers, as well as some niche players, are offering coverage to fill the gaping voids left by conventional policies that class pandemics in the same exclusion bin used for nuclear war.

Some innovative approaches to business interruption, for example, include new parametric forms which measure relevant indices of traffic at a retail location and pay out if actual traffic falls below a certain level for a certain period, thus avoiding semantic issues about what caused the interruption - actual damage or a governor's decree.

The founder of one new entrant in this coverage line says, "... post-COVID, it would be as irresponsible not to buy insurance against pandemics as it would be not to buy insurance against fire." This idea takes on even more heft when you consider that some insurers have recently removed pandemics from existing forms. Social distancing (a phrase unheard of six months ago) can drive losses as well as complete lockdowns. AXA-XL, among others, is developing products to address this exposure deploying concepts from usage-based insurance.

One far-sighted insurer has even introduced "relapse coverage" as governors and mayors begin to consider or implement second round lockdowns. COVID adds new risks to all aspects of supply chain management and project completion. Products are coming to the fore to address all of these new gopher holes. None of this is cheap, of course, but we have yet to discover any aspect of coping with COVID driven risks which is sold in the bargain basement. 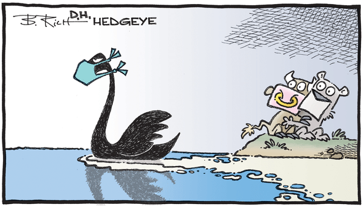 The blackest of black swans

In a documentary aired last year by Vice News, a graying truck driver talks about how proud he is of his work. "I know I'm providing the world with whatever I've got in my freight," he says. "I deliver your clothes, your food. It's a good feeling as a driver, as a human being."

That feeling, and his job, could go away soon. After the trucker rides along on a demonstration of a self-driving semi, the interviewer asks him what he would do if he didn't drive a truck. "I can't honestly answer because I really don't know," he says. "I'd be scared."

He's not the only one.

From The Future of Work, Society of Human Resource Managers

In lieu of MLB, we offer this double-header:
Just declaim some lines from Othello,
And they'll think you're one hell of a fellow.

- From "Brush up your Shakespeare," Kiss Me, Kate, by Cole Porter


Whilst yet we live to say, 'this is the worst,'
The worst is not yet come.

- From King Lear by Shakespeare