The growth of retail wages outpaces other industries. It is driven by the combination of state-by-state legislation to materially raise minimum wages and also a competitive, yet shrinking, talent pool. This means that the average total temporary disability (TTD) payments can be expected to rise in the aggregate without internal controls to reduce their impact.

TTD benefits are paid out to employees while they’re unable to work and recuperating from a workplace illness or injury. There’s usually a waiting period for TTD, meaning the injury must keep an employee out of work for a certain number of days before he or she is eligible to file a claim. TTD typically continues until the employee returns to work, reaches maximum medical improvement or receives benefits for the maximum number of weeks allotted by the state.

Because TTD is directly tied to an injured worker’s average weekly wage (AWW), the aforementioned wage inflation has the potential to greatly increase retailers’ indemnity costs, if measures to reduce these costs are not part of your risk program.

Broad-based economic growth has created an unusually tight labor market in the United States. The low unemployment rate has driven overall wage growth above 3% per year across the economy. The wage increase for retail industry workers has outpaced all-industry wage growth and inflation, with an increase of 5% in the most recent year. 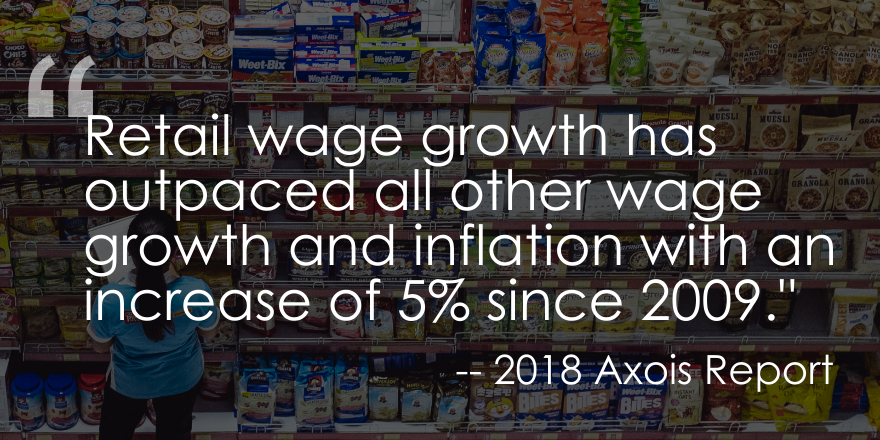 A recent Axios report indicates that Target, which employs more than 300,000 workers and operates 1,845 stores in the United States, announced that it was raising its minimum wage to $13 an hour starting in June. That comes on top of Target’s decision to raise its minimum wage to $12 an hour, from $11, just last year. Pressure is now growing on Walmart, the world's largest retailer, to likewise increase its $11 hourly minimum wage.

And companies like Amazon and Costco are already paying workers a $15 an hour minimum.

Since little can be done to mitigate wage growth, which is largely an external factor, retailers risk managers need to be pay particular attention to reducing Lost Work Days (LWD) as wages continue to climb.

So while the increase in expected indemnity cost is not 1:1 with wage increases, it is expected to be substantial.

Hitting the Brakes on TTD Growth

Despite increasing wages, with a strong focus on return to work, it is possible to maintain steady indemnity costs. When we looked at our retail book of business we found virtually no change in average TTD cost over the last five years, driven by a reduction in average TTD lost work days of 10.9% (4.8 days).

We believe TPAs can play a critical role in controlling claim severity by lowering LWD. 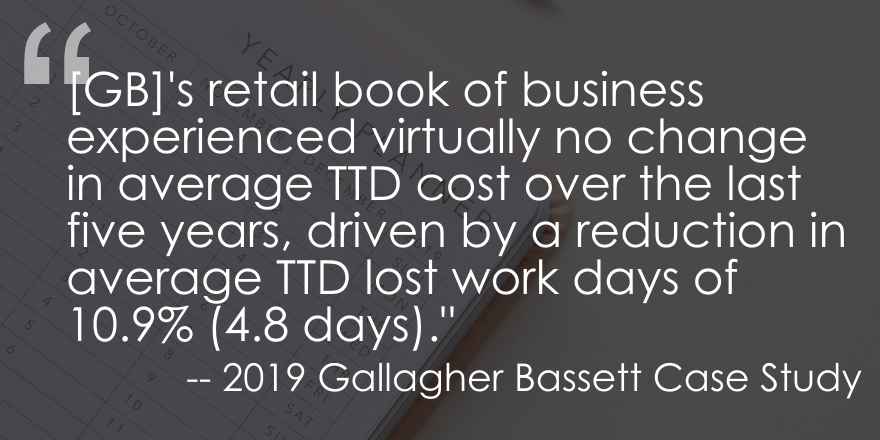 Given the potentially higher costs built into the system by rising wages, retailers need to monitor TTD and take proactive steps to reduce their costs. At Gallagher Bassett, we have worked closely with our client partners to mitigate the severity impact of lost work days through two principal means: Robust RTW programs and selective utilization of Nurse Case Management.

Having escalation procedures in place between the claim office, risk and human resource teams has helped reduce the number of lost work days.  Sometimes we hear “We just don’t have light duty work.”  Despite the availability of traditional light duty positions in retail, there are opportunities outside of the store where your injured workers can remain out of the house and productive while placed on light duty.

Through formal return to work programs with return to work coordinators, we help guide injured employees to the right providers and course of treatment, as well as accommodate light duty placements, even with non-profit organizations that will have a need for services that can be provided by your light duty injured worker, thus greatly reducing LWD, or eliminating them altogether.

Selective utilization of early nurse case managers is critical. High severity claims can often benefit from nurse case intervention – either telephonic or field case, based on the severity of the claim.

Two conditions must be met for case management to be effective:

Research we have conducted on this topic suggests that a case management utilization rate between 8-10% of all WC claims is optimal, and if not deployed early (within 45 days of the accident) in the claim lifecycle the benefit of case management involvement is greatly diminished. Clients utilizing NCM on 8-10% of WC claims have 7% lower costs than clients with 11%+ utilization.

While wage inflation has had a significant impact on retailers, solid risk management and claim oversight on TTD claims will help level the costs of these indemnity claims. Your Account Manager or the Gallagher Bassett Retail Practices Group can assist you in achieving these goals.

Mary McGurn has 30 years of industry experience and leads the Retail Practice at GB. You can find her on LinkedIn.

Daniel Link is an Assistant Vice President of Risk Analytics at Gallagher Bassett.  You can find him on LinkedIn.

Sandra Nikodimas is a Business insghts Analyst at Gallagher Bassett.  You can find her on LinkedIn.