A team of WCRI researchers presented their annual roundup of workers' compensation trends across the states on the last day of the WCRI conference. This year's work focused on three important lines of development.

VALUE BASED HEALTH CARE IN COMP

The fascinating presentation by Dr. Alexandra Page of Musculoskeletal Healthcare Solutions can be summed up in one slide: 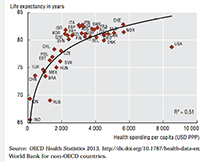 Why is the US such a dramatic outlier, deriving a middling life expectancy while spending twice as much on healthcare as most other OECD countries? One approach to improving outcomes is the US is the greater adoption of value based health care (VBHC) practices.

Dr. Page reviewed the basics of VBHC as it is being applied in non-occupational health care in certain locales and programs today and asked the question—could VBHC provide better outcomes in workers' comp as well? What would bundled pricing look like in comp, for example? Unfortunately, useful models are few and far between in the US today.

For the moment, a number of obstacles limit using VBHC in comp. Primary among them is the question of who bears the risk when a course of treatment veers outside the expected cost limits? As Dr. Page noted, "change is scary." On the other hand, for how much longer can the US afford to be such a conspicuous outlier in terms of the clinical value received?

KEEP YOUR BITCOINS BY AVOIDING RANSOM

One advantage of automated crewless ships cited by Rolls-Royce (as in the article below) is that there is no crew to be taken hostage by pirates and held for ransom. So how can you minimize the chances that your data will be taken hostage by ransomware as discussed in The GB Journal a couple of issues back?

A recent article in Health Data Management provides an excellent primer on basic steps to avoid being held up by the dry land equivalent of Somali pirates. While the article is aimed at the risk managers and CIOs of medical facilities (since they have been ransomware's target of preference), the preventive measures described apply equally to every business which is system and data dependent for getting its daily work accomplished.

The item lists four basic steps: (a) back everything up in a secure environment, (b) deploy appropriate behavior-based anti-malware safeguards, (c) have a security incident response plan tested and ready to roll, just in case, and (d) educate your employees to avoid phishing - and test them periodically. A sidebar embedded in the article offers a ten step plan for those interested in more details.

This is not about a nice-to-have safeguard. According to the FBI, 4,000 ransomware attacks occur every day in the US alone and they are not cheap. The ransom currency of choice is bitcoin, so you can either implement a four (or ten) step plan and keep it current and tested or you can start stockpiling bitcoins because you'll probably need them. In the old days a brass barreled blunderbuss was an excellent pirate deterrent. Today it's more complicated.

WILL YOUR NEXT SHIPMENT BE DELIVERED BY A GHOST SHIP?

High seas shipping is not a subject we usually cover in the Journal, but this story has major ramifications on land as well as at sea. Rolls-Royce has announced that it will begin launching and entering into service crewless ships in 2020. The replacement of working people working continues to gain momentum as technology targets more and more types of jobs.

Rolls-Royce is not a fringe engineering company scratching for a new industrial toehold. This is a mainstream development. The folks at Rolls have thought this out in detail. They are starting with smaller vessels such as tugs, ferries and lighters, but large ships are already being planned. Rolls expects the new ships to be more economical but also safer.

Poor seamanship has been the cause of many major shipwrecks from the Titanic (the captain wanted to set a new record crossing time) to the Exxon Valdez (the captain was drunk). The automated ships now under design have neither ego issues nor substance abuse problems and their machine learning process has taught them how to recognize and deal with every kind of storm and maritime complication seen in the last generation or so.

How long before a crewless container ship docks and unloads its containers in a highly automated port, putting them on trailer beds pulled by driverless big rigs? One series of well-known risks, such as workers' comp, will all but vanish while a whole new set of largely unknown risks will take center stage. A great time to be a risk manager.